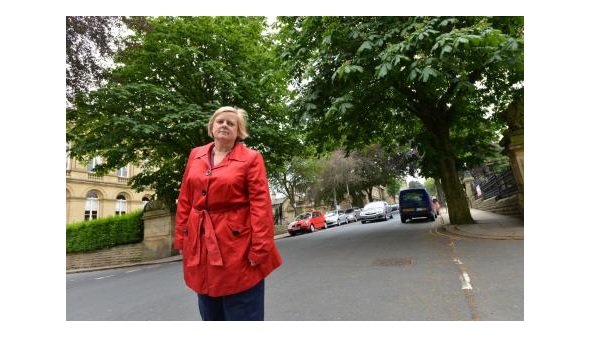 Saltaire Village Society is opposing Bradford Council’s decision to remove all trees from historic Victoria Road as part of £700,000 plans to make the area more pedestrian-friendly.

Option One received the most support – with 40 per cent of people who responded, or 79 people, in favour of chopping down 32 trees. However Vanessa Pilny, chair of Saltaire Village Society, said yesterday that this was not a significant verdict as the vote to keep the trees in some form had actually been split in two.

And she has personally set up a petition against the felling, which has collected 268 signatures since Saturday.

She said: “I acknowledge that 40 per cent of those who responded voted for Option 1, but 54.83 per cent voted for the options that kept trees in some form.”

Mrs Pilny said the e-petition asks for the decision to be revisited so the public and councillors can further explore options.

“Yes, there were no trees when it was built but neither were there cars or tarmac. I’m sure the community and council working together can come up with a middle ground that most people will accept.”

Saltaire Village Society’s committee has suggested a compromise between Option Two and Option Three – large trees kept where they did not cause a serious problem, smaller trees to replace those removed and a parking free area of setts between Victoria Hall and the College with flower planters to create the feeling of a square.

And the three Green Party councillors for Saltaire, Cllrs Kevin Warnes, Hawarun Hussain and Martin Love have written jointly to the Telegraph & Argus against the wholesale removal of the trees.

The clls said the public response sent two important messages to Bradford Council, firstly that a large majority of people want the big trees removed and secondly that most people favour retaining a tree presence on Victoria Road – provided the trees are appropriate for our limited street space.

Julian Jackson, Bradford Council’s Assistant Director for Planning, Transportation and Highways, said: “The decision, by councillors and officers, to remove trees was taken after consultation with people who live there, business owners and other interested parties who agreed it was the preferred option from a choice of alternatives.

“We are investigating the possibility of replacing some of the trees with more suitable species but the overall impact of the work will allow damaged pavements to be repaired so people with pushchairs and disabled people can have better access, more light will filter through to people’s homes, and it will allow the whole area to be enhanced and developed for the future.