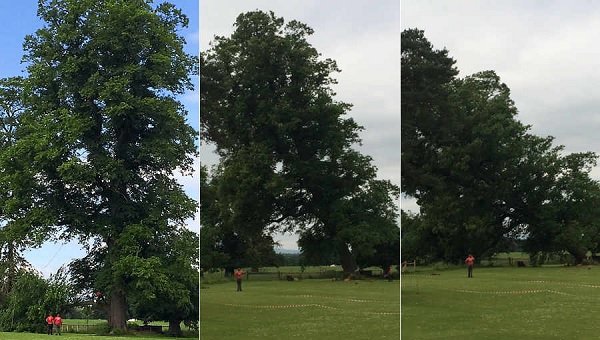 It has stood proud for 150 years, but took only a few seconds to come crashing to earth.

A 125 foot tall lime tree was felled at Worfield Cricket Club after it was badly damaged following a lightning strike.

The protected lime tree was stuck by a bolt of lightning during a thunderstorm last weekend, which left it badly damaged with two splits in its trunk.

Experts came out to Worfield Cricket Club, near Bridgnorth, to assess the damage because the landmark tree has a preservation order on it.

A 30-metre boundary was placed around the tree, which sat near the boundary at the club.

The exclusion zone meant no games or training sessions had taken place since the lightning strike on June 7.

The tree, which stood in the far right corner of the ground, was eventually cut down by specialists at the ground yesterday.

Club spokesman Nick Plain said: “It was like saying goodbye to an old friend.”

It was one of the biggest trees in the park and because it sat inside the club’s boundary rope the rules were that if the ball was travelling for six runs, but hits the tree in mid-air, four runs was still called.

The club will continue working with the council to try and get its home matches and training sessions back up and running.