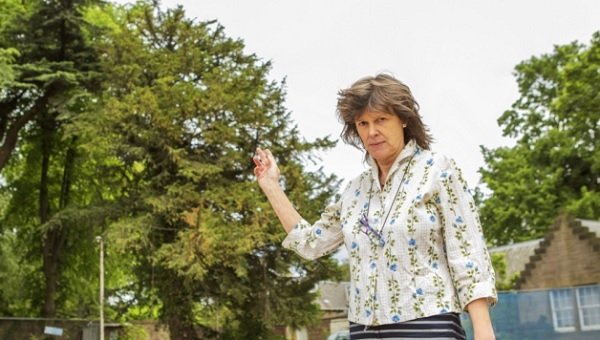 Morningside residents are up in arms over claims developers broke their promise to spare protected trees – some of them over a century old – from the chainsaw.

An 81 -home development in a conservation area at Pitsligo Road was granted planning permission in 2011, including authorisation to cut down 31 trees that were in poor condition, blocked access to the site, or stood where buildings were set to be constructed.

However, Queensberry Properties and Telereal Trillium have since applied for amendments to their original application granting them permission to fell more trees, which residents say are healthy and could be accommodated in the design.

One particular yew tree was listed in a survey submitted with the planning application as being of “high quality and value”, which could grow for “40-plus years”.

Sarah Oliver, who lives nearby, claims that five trees which developers originally said would be left untouched have since been seriously damaged or felled, including at least one tree over 100 years old.

She said: “In the public consultation period, it was quite clear which trees were to be protected and which trees weren’t. Since then, they’ve mutilated one cedar, they’ve cut a larch, two other trees, and now they’re trying to cut this yew.”

Ms Oliver highlighted the case of the yew tree on the site, which developers requested to remove to allow access for a driveway.

“It is not necessary to cut that tree down to make a straight road,” she said. “Why can’t they put a bend in it?”

Ms Oliver also believes that removing too many trees and covering the ground with hard surfacing will increase the rise of flooding in the area.

A council spokeswoman said: “A decision was taken in May to allow the developer to remove the tree when it became clear that it overhangs an access road. Its removal is unfortunate but necessary as the location could potentially result in damage to the tree and vehicles using the road.

“In addition, to prune the tree to provide the normal clearance above a road would damage it. A large number of other trees are being retained.”

A spokesman for the developers said they had “looked again” at their plans for the trees on the site, but would go ahead with plans to fell them.

“Whilst having some sympathy for Ms Oliver’s stance on retaining the yew tree, we can verify that the council have confirmed that the removal of this particular tree is acceptable,” the spokesman said.

“Having looked again at the situation in the light of Ms Oliver’s observations, we have concluded that removal of the tree is necessary in delivering the consented development which will include the retention of numerous other trees on the site as a condition of the planning permission.”