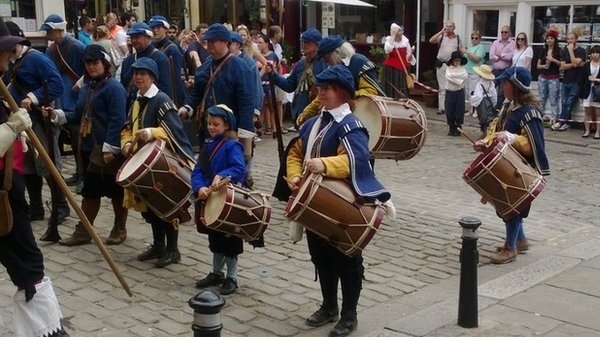 A book listing the donors of more than 1,000 trees given to the Queen for her Silver Jubilee in 1977 has been put on display after being lost for 35 years.

The Queen’s Trees Record had been forgotten after being wrongly catalogued and then misfiled.

It was discovered after a two-year search, led by Ray Attwood, a member of the Sealed Knot re-enactment society.

A ceremony, led by members of the Sealed Knot, was held to reinstate the book at Windsor Guildhall.

Mr Attwood, organiser for the society’s Prince Rupert’s Blew Regiment of Foote, began his quest in 2011 after discovering a list of Sealed Knot members who donated money towards 87 trees planted in Windsor Great Park.

He had initially been trying to trace the location of the Sealed Knot trees but the information he sought was in the missing record book.

During the search, which led to many dead ends, he contacted dozens of people, including the Duke Of Edinburgh, and searched the Buckingham Palace Archives.

He said: “It was discovered in Windsor Museum Collection and someone 35 years ago gave it a wrong reference and then put it on the wrong shelf. Nobody knew about it because it wasn’t located properly.”

During the ceremony, members of Prince Rupert’s Blew Regiment marched from Windsor Library, via Peascod Street, to the Guildhall.

In April last year the Sealed Knot trees in Windsor Great Park were rededicated in a ceremony organised by the same group.