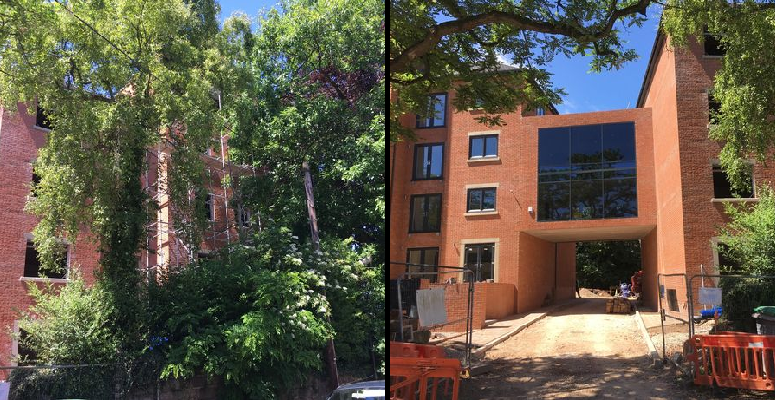 Residents in a Derby cul-de-sac are objecting to plans by a developer who wants to carry out work on trees covered by a preservation order claiming that the apartment block should never have been given the go-ahead initially – almost 13 years ago.

People in Lonsdale Place say they are fed-up with the length of time the development has taken to get off the ground, they are concerned for the trees and also are complaining that the road has frequently been covered in mud in the past.

But Ram Narroya, managing director of Brookwell Developments Ltd, based in Friar Gate, Derby, said the building of the flats was a “big project” and “would get done when it gets done”.

He added that his application to prune the trees had been done in consultation with experts, mud had been cleared up off the road immediately after there was a complaint and that other building work in the area had been contributing to the state of the road.

Over the years, the developer has applied – with varying degrees of success- to cut back some of the trees. In 2015, permission to prune the trees was refused but some work was allowed by a further application in 2017.

The current application is to carry out work on lime, copper beech, red oak and yew trees to ensure a two metre clearance from the new development.

Mr Narroya said: “The slump in the property market followed soon after permission was given in 2006 and although we bought properties, it wasn’t the time to develop the new apartments. It is moving ahead well now and we have applied to carry out the tree work in a proper manner through an arboriculturist. I like trees, they are a good thing and I have trees around my home.

“I am doing my best to get things done but I think people complain whenever anything happens near their homes as a matter of course.”

One resident has written to planners at Derby City Council urging them to remember that the tree preservation order “was placed on the trees for a reason.”

And Denyse Hall asked the question why permission was given to build the apartments so close to trees with a protection order on them?

She added: “These trees have been here since day one and are stunning examples of British nature. These trees are protected for a reason. If anything should be lopped it should be the building.”

Ahead of the planning application being submitted earlier this month, a Derby City Council spokesman said that council teams had been out to sweep the road in response to residents’ complaints.

He added: ” We also assessed the trees on site. We have also made contact with the developer to express our concerns regarding the development as built and its proximity to the existing trees.”

A decision on the planning application will be made in due course.