Are Network Rail breaching the law by cutting down trees? 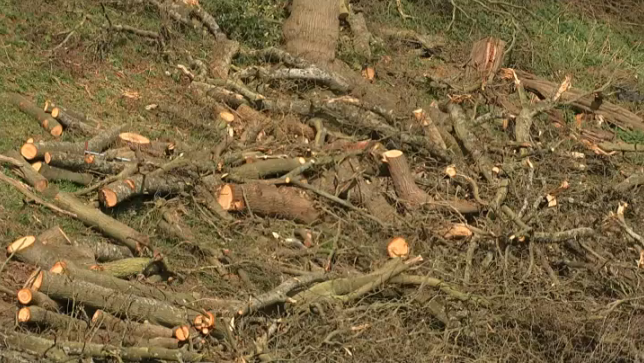 Network Rail stands accused of ignoring laws designed to protect wildlife as it battles to clear hundreds of thousands of trees which line the network.

Channel 4 News has filmed Network Rail contractors clearing woods at the side of the railway during bird nesting season – something which conservation groups warn could be a breach of the law.

The company, which says it aims to conduct tree clearance work outside of the bird nesting season, claims that rail side woodland is carefully inspected for birds’ nests before trees are felled.

The criticism comes as the company which manages Britain’s railway network carries out a nationwide programme of tree and vegetation clearance to avoid weather-related delays. Following the St Jude Storm in the winter of 2013/14 there were 1500 incidents involving trees or branches falling on to tracks.

Network Rail has faced criticism and threats of legal action before after clearing trees and shrubs from the railway during bird nesting season – which runs from mid-March to August. On its website Network Rail says: “We avoid work at times that will cause harm to, or disturb, nesting birds unless there is a significant and immediate threat to passenger or resident safety.”

However we witnessed contractors for the company with chainsaws carrying out work clearing woods at Sonning Cutting in Berkshire on 7 April –  well into the nesting season.

“It’s an offence to disturb or destroy an active bird’s nest,” said Mark Thomas, senior investigations officer with the RSPB. “The last thing we need is for nests to be destroyed or damaged by people doing trackside maintenance – work which can be done in the autumn or winter.”

Further north on the network, near the village of Stone in Staffordshire, the British Transport Police intervened when residents complained of trees being felled that contained active birds’ nests. Network Rail has since suspended activities on that section of the line.

In a statement Network Rail told Channel 4 News “It is a delicate balance of our obligations to keep passengers safe and our responsibilities to our neighbours and wildlife living trackside.”

The company went on to say the team we witnessed working at Sonning Cutting were “tidying up” after work completed the week before. It added: “During bird nesting season we undertake daily assessments placing exclusion zones around any areas where there is evidence of nesting.” Work does not recommence until all that evidence has gone.