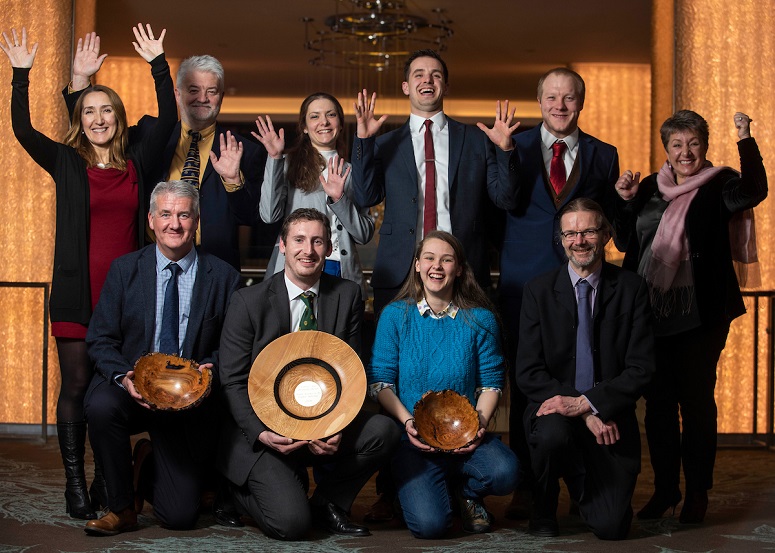 A trainee forester who inspires young people to consider careers in the industry was among the winners at Confor’s expanded awards dinner.

Mima Letts, Founder of Tree Sparks and a trainee forester at Chatsworth House in Derbyshire, won the Changing Attitudes Award. Ahead of fellow finalists Cheryl Lundberg of Lockhart Garratt and Andy Baker of Tilhill.

Started in 2018 by Mima as an undergraduate, to show young people that working with trees can be exciting. It increases awareness of forestry careers and offers first-hand experience.”

“Very occasionally, one comes across someone with star quality – Andrew definitely has this.”

The third new award, for Innovation & Research, went to long-serving James Jones & Sons haulage manager Jon Ritchie. Awarded for his long-standing efforts to improve the health, safety and welfare of hauliers in the industry.


The Dedicated Service to Forestry Award was presented to Martin Gale. Chairman of BSW Timber, by Fergus Ewing MSP, Cabinet Secretary for Rural Economy and Tourism with the Scottish Government.

“Martin has been a senior figure in the industry since his appointment as Managing Director of Shotton Paper Company in 1998. He was one of the driving forces in the establishment of Confor in 2005.

He has always provided his time generously to support industry bodies.”

A special award went to Sir Harry Studholme. Who recently stepped down after seven years as Chair of the Forestry Commission.

“Sir Harry served as chair during a period of great change in the Forestry Commission. Throughout that time he provided a calm presence. I have always found him to be hugely knowledgeable and truly passionate about forestry.”

More than 150 guests attended the awards dinner at the Sheraton Grand Hotel in Edinburgh. Mr Goodall said he was delighted with the increased turn-out.

There was also a special presentation, made by Fergus Ewing. Presented to David and Dorothy Sulman, who have retired after what Mr Ewing described as “outstanding” service to the forestry and timber industry.

“We wanted to celebrate the importance of strong leadership, brilliant innovation and great communication in creating a thriving 21st century forestry and timber industry ,”

He added. “We were very pleased with the quantity and quality of the entries in all three new categories.

I’m delighted to honour young foresters like Mima Letts and Andrew MacQueen as well as a great servant of our industry like Jon Ritchie.

I’m very optimistic about the coming years for our profession. As forestry moves up the political agenda, its environmental and economic benefits are more widely recognised.”