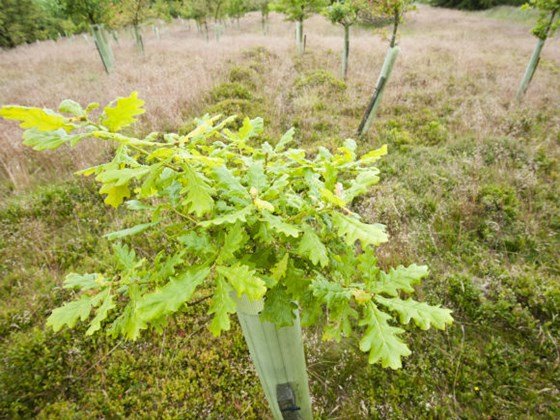 The Woodland Shield is presented by Kinross-shire Civic Trust to recognise environmental improvements including the planting and management of woodland, and the promotion of public access.

They received the award alongside Portmoak Community Woodland Group, a key partner in the work at both Kilmagad and Portmoak Moss.

Kilmagad Wood is a broadleaf woodland interspersed with open ground. It supports a wide range of wildlife and sycamore, beech and oak make up the main tree species.

In 2008 they started to extend the wood to create a buffer around an area of ancient woodland, and the local community has been a key part of the project.

Four acres of new woodland were planted and a community orchard containing a variety of fruit trees was established by the Portmoak Community Woodland Group in 2011.

Access for people is a key feature, and in addition to the orchard a safe route to school has been created for local children, as well as good access to the Michael Bruce Way and the Lomond Hills.

The project was chosen from a shortlist of six important initiatives. The judges, including chartered forester Len Yull, commented that the new woodland at Kilmagad is dovetailed into existing ancient woodland, and there were clear signs of community use and involvement.

The improvements to Kilmagad Wood were supported by Forestry Commission Scotland through Forests For People.