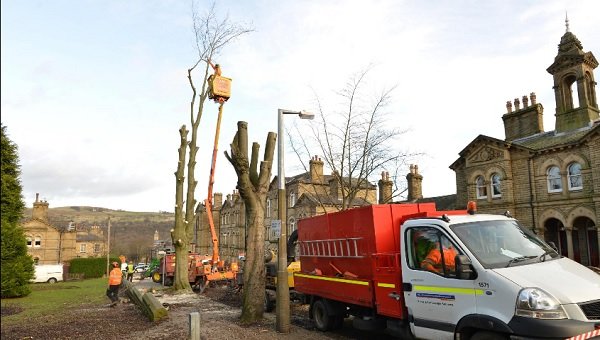 Work to fell an avenue of 32 mature trees in Saltaire in the Bradford Metropolitan District, West Yorkshire began in earnest on Thursday 15th January as the sound of chainsaws filled Victoria Road.

Part of a restoration scheme costing £720,000, workman began at the top of the road opposite the almshouses which have long suffered from loss of light in summer months.

With the trees cut to street level, the root damage done to pavements was all the more obvious, said Saltaire resident for 20 years, Kath Smith.

She said: “It’s so sad to see the trees being chopped down, but it did have to happen because they’ve caused so much harm to the pavements.

“You can really see how the stones have been lifted right up by the roots.”

Website designer Dan Clarke works in Saltaire and said he was looking forward to seeing Victoria Road returned to how Sir Titus Salt intended it.

“The trees are attractive in summer, but that’s not how it was intended to be.

“I think Victoria Hall is going to look a lot more striking when it’s in clear view,” Mr Clarke said.

Ward councillor and Green Party Leader Martin Love said tests had showed only eight new trees could be planted due to issues with underground utility cables.

“There are lots of different types of cables, fibre optic and power cables so it’s very difficult,” Cllr Love said.

“They have tried to put in as many as possible, but it’s very tricky.

“Holes have to be dug a metre deep and then the tree roots surrounded by a very strong sort of plastic eggbox-like cage which allows water in, but makes the roots grow down rather than outwards.

“Because there are only specific places where they can put in new trees due to issues with different underground cables and pipes, only eight trees will be planted alongside Alexandra Square,” Cllr Love said.

The major renovation scheme will also see general improvements to pavements and kerbs and also some new street lights.

“Of course it is very sad that the trees had to go, but we have to accept they had become a massive problem which was only going to get worse,” Cllr Love said.

“And I’m pleased they are getting the work done now as it means we can get the new trees in by March and so they will be in place and established within the coming planting season,” Cllr Love said.