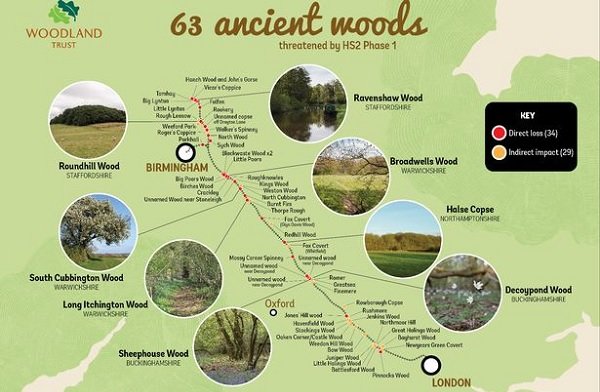 Following the publication of the HS2 Select Committee’s report the Woodland Trust welcomes the Committee’s clear direction  to HS2 that it needs to identify an independent third party arbiter to review its flawed ‘net loss’ metrics and this issue may need to be considered by the House of Lords. This point was pushed strongly by the Trust at its Select Committee hearing on February 3rd. It’s also good to see the Committee agree that any tree planting proposals must be formalised and clearly stated rather than simply an aspiration.

(Page 74, 301)Shows the Committee suggests that HS2 are making decisions on environmental effects that they should not be deciding on solely and there is a call for an independent advisor on this.
Committee Member Mark Hendrick MP was so concerned about the lack of clarity and poor justification for HS2 Ltd’s approach to their ‘metrics’ for justifying their response to loss of ancient woodland and damage to biodiversity that he said: “Again, if HS2 are judging, or marking their own homework, as far these metrics and biodiversity is concerned, that’s not necessarily a good thing, is it?”

The Trust  is concerned however to see that many of the key errors highlighted during the Select Committee hearing regarding the flawed preparation for the Hybrid bill by HS2 Ltd are not be mistakenly considered as best practice and could lead to unsatisfactory precedents. It is important that these be addressed in the forthcoming parliamentary stages:
These include:

Austin Brady, Director of Conservation at the Woodland Trust said:

“Ancient woodland is an irreplaceable habitat and its loss should always be avoided. Although it’s good to see the Committee’s recognition of the need to reassess HS2 Ltd’s flawed ‘no net loss’ calculations, much of the remaining corner cutting by HS2 Ltd in relation to ancient woodland has been ignored. In doing this, the Committee has missed an important opportunity to ensure this project is the very best example of national infrastructure with the best interests of the whole country, including the environment at its heart. We want to see these shortcomings addressed during the forthcoming parliamentary stages.”