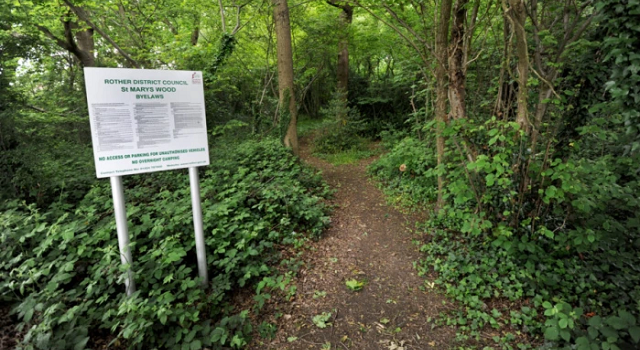 A piece of ancient woodland is set to be rescued from auction as Rother District Council (RDC) has recommended it be bought by a group of residents for just £1.

The cash-strapped authority sparked dismay when it was revealed it planned to put St Mary’s Wood up for sale.

After RDC publicised its plan to sell off the land, it received 15 responses from the public worried over a potential loss of public amenity.

The authority said it received ‘considerable local interest’ in the woodland following the notice.

But the lot was withdrawn at the last minute following legal advice.

St Mary’s Wood has a restrictive contract on it, meaning it must be kept as an ancient woodland.

Concerned residents of EARA decided to launch a bid to buy St Mary’s in a bid to save the ancient woodland site.

The group formed St Mary’s Wood (EARA) Ltd, with Stuart Earl, an independent councillor at RDC, accepting the role as co-director of the new company.

Residents have already made ‘substantial’ financial pledges to the new company, while a new group, Friends of St Mary’s Wood, is to be set up to manage the funds for ongoing upkeep costs for the site.

At today’s meeting following the cabinet’s decision, Councillor Tom Graham, who represents St Mark’s ward in Bexhill, said: “I would like to express my absolute delight in seeing local Bexhill people, outside of elected members, approaching the council to express an interest in purchasing a parcel of land for no personal, political or financial gain.”