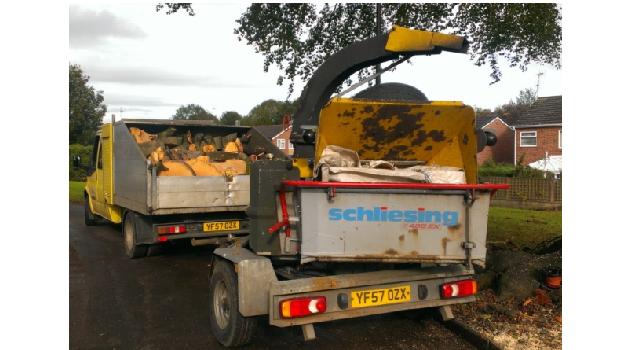 A Ripon woman has described the “terrifying moment” she was nearly struck by a falling branch from a 30ft tree.

Sheila Illingworth, 54, was walking her dog around her Hillshaw Park Way home as the “massive” tree branch fell from the tree and onto the road.

Harrogate Borough Council’s arboriculture team arrived later in the day to clean up the branch before another part of the tree broke away the following day.

Residents on Hillshaw Park Way have complained that the near-miss is just the latest in a long line of incidents where branches have fallen from the tree and have called on Harrogate Borough Council to perform a risk assessment.

Mrs Illingworth said: “I would have normally been walking under the tree but, because of the acorns, I had to move to the other side of  the road before I heard this crack.

“I was 30 seconds away from being squashed. The part that fell was the size of a tree in itself so I would have had no chance.

“It has happened before and the tree is a danger. We are talking about somebody’s life. If I had been under the tree it could have killed me so there needs to be a risk assessment.”

With Ripon Cathedral School round the corner from Hillshaw Park Way, residents have voiced their concerns about the safety of parents walking their children to school by the tree as well as youngsters that play football on the green area.

A spokesperson for Harrogate Borough Council confirmed that a tree surveyor had inspected the tree from ground level on Friday afternoon but “found nothing of a foreseeable failure in nature with the remainder on the tree”.

However, on Friday evening after the tree surveyor had made his assessment, a second smaller branch came out of the tree forcing him to return on Monday for a re-inspection.

A spokesperson said: “It is unknown at the time as to why the second branch failed, however that may have been due to it being struck by the initial branch failure, this causing a fracture that could not be seen from ground level.

“Following the results of the inspection, we will know more about the state and condition of the tree, which will help form the basis of any future management that we feel is necessary.

“We may, however, have to schedule a full climbing inspection for this tree, dependent upon what our tree surveyor finds.”

Mrs Illingworth said she would like to see the tree removed to avoid any chance of accidents and admitted she was now nervous walking around the area.