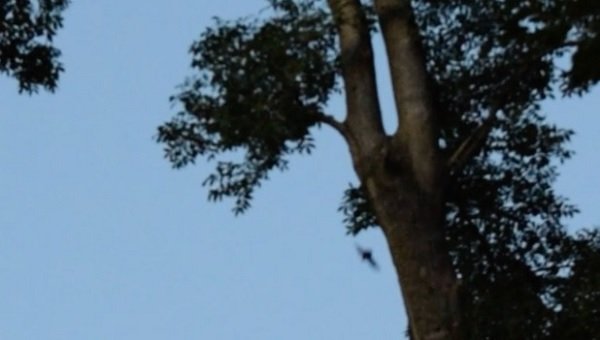 The company behind a windfarm project near Pontarddulais insist no trees will be felled where bats are living – despite being challenged over their presence.

Innogy Renewables, the company behind the Mynydd y Gwair windfarm project, say they haven’t detected the presence of any bats in trees which are due to be felled, even though concerns have been raised that a roost will be affected by the work.

The company has asked for any evidence of their presence to be forwarded to them, prompting an evolutionary biologist and museum curator, David Waterhouse, to produce what he says is evidence of bats.

And Gower MP Byron Davies has challenged Innogy to reveal a report they have commissioned, which he says is being withheld from Swansea planners, because there is no legal obligation to do so.

Dr Waterhouse, whose family have lived in nearby Bolgoed Road for more than 30 years, said: “My family and I have known there to be bats roosting and feeding in the trees and fields nearby all that time.

“This film evidence refutes the survey work carried out by the company that ‘Innogy’ commissioned which was submitted to the planning section of the City and County of Swansea as well as to Natural Resources Wales.

“Since submitting the evidence to Swansea Council, the developer’s ecologists have had to admit that their initial survey was wrong.

“It’s a shame that independent ecologists, not appointed by Innogy, and with a proven track-record for accuracy, can’t be called in to investigate this area.

“By now the protected bats will have moved to nearby winter roosts, which could also be threatened by Innogy’s roadbuilding plans; meaning that both their summer and winter roosts are now being threatened by a lack of ecological appraisal of this area”.

Byron Davies MP, meanwhile, has written to Innogy asking them to disclose their report.

He said: “The firm states that the survey found no evidence of that. If that is the case, why are they not disclosing the report? It’s bound to make local people fear something suspicious is going on.

“These bats are a protected species and destroying their habitat is a criminal offence, and people in Mawr and Pontarddulais expect all the laws protecting such animals to be enforced”.

Innogy, however, say the identified roost is not in any tree which is due to be felled.

A spokesman added: “We are aware of the concerns voiced about a bat roost in trees near Bolgoed Road, in the vicinity of those trees identified to be felled, to facilitate the construction of the wind farm access track.

“We take such concerns seriously and are responding in earnest to each enquiry. Whilst developing Mynydd y Gwair Windfarm we undertook numerous bat surveys and identified the noctule roost in question.

“These surveys were submitted in the environmental statement of our planning application and, as part of the applications made under the Commons Act 2006, which have been thoroughly assessed by both Swansea Council’s planning department and the Welsh Government.

“The identified roost is in a tree that will not be felled nor affected by the felling works. Over and above what is required, we continue to monitor the situation and will do until the felling work is complete.

“We are strongly committed to safeguarding wildlife. We have carried out rigorous assessments and will continue to do so throughout construction of Mynydd y Gwair Wind Farm.”