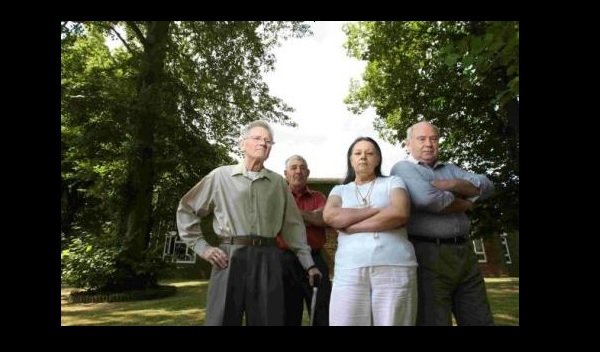 ELDERLY residents are fighting plans to force them to pay for the chopping of 10 trees at a Winchester retirement block.

Residents at Mountbatten Court have been asked to foot the bill for the removal of the trees at the site off Andover Road.

But they claim the £9,000 bill isn’t their responsibility, and the request tops a long line of modifications the building has undergone which they have been forced to pay for.

Ex-serviceman Dennis Dominey, 67, said the charges have increased significantly since he moved in seven years ago as a result of endless improvements to the building.

“They’re only too quick to spend our money. Because the trees are so huge they’re knocking through the foundations. So we had a meeting and the manager said it has to go on top of our rent like a service charge.

“She went back to her line manager to find out more, but the outside of the building is the landlord’s responsibility, not ours, and we shouldn’t have to pay for the removal of these trees. I’m responsible for inside the house, not the outside.”

John Hodgson, 69, has been living at the site for five-and-a-half years, and said they had also been asked to pay for the cleaning of some glass panels at a cost of £300.

The former cleaning-company owner decided to give the panels a scrub himself rather than pay the charge. He was sent a letter soon after which said “the cleaning of communal areas should only be carried out by approved contractors”.

Mr Hodgson said: “I’ve come here to rent an apartment; I’m not putting in an investment. So many residents here are frightened of the repercussions [about speaking out]. I don’t want to fight with the management but I’m not paying for something I can do.”

The owners, Housing 21 proposes to add £1.40 a week to the residents’ service charges for a year to cover the tree work.

Ann Killip, manager at Mountbatten Court, said: “We understand that tenants may be frustrated by potential changes to their service charges.

“However, we can confirm in relation to this matter, nothing as yet has been formally agreed and we will be liaising with all of our residents to ensure they are fully informed as and when the situation develops.”

Winchester City Council has many trees in tenants’ gardens and foots the bill for major tree work.