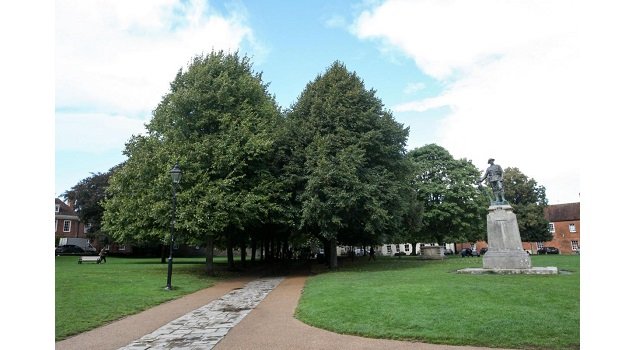 An avenue of lime trees in the grounds of Winchester Cathedral has been culled.

The red-twigged lime trees which line the path towards the Cathedral’s western entrance will be reduced by half, with 14 of the 28 trees cut down and removed.

The trees were planted in 1985 to replace the previous set of common lime trees which had become diseased and needed to be felled over safety concerns.

Head Gardener at the Cathedral, Emma Sharpe, who is over seeing the work, said: “Lime Avenue is so overgrown now that we have to do something to rescue the trees or we may lose them all” she said. “They are now so close together that every tree is poorly. Removing alternate trees will allow those remaining some room to breathe and stretch out.”

She continued “The full effect will take one to two years when the trees will fill out and broaden.”

The trees were being tended to by Gary Snellgrove and his team at Wessex Tree Surgeons. Mr Snellgrove over saw works to cutt down the old trees in 1985, with him doing the cutting and his wife cleaning up.

Mr Snellgrove said that once completed there should not be any need for any more major works in the future and that the remaining trees will be much healthier.

The works were funded by the Friends of Winchester Cathedral. Bruce Parker, Chair of the Friends said: “I know people don’t want to take trees down but we are saving the same number.

“When people see the Western front of the Cathedral through the trees they will say what have we been missing all these years. Majesty and splendour – that is what we are producing here.”

The Dean of Winchester Rev’d Catherine Ogle who said a a prayer on the day for the continued health of the trees said, “We have got the long term care of the estate at heart. Caring for the trees is very important to us. We have taken expert advice and this is the best way. People do not like the idea of trees coming down but this is to produce something better.”

The wood from the felled trees will be transformed into St Swithun’s eggs and Wooden crosses.