Will our striking 800-year-old put the others in the shade? 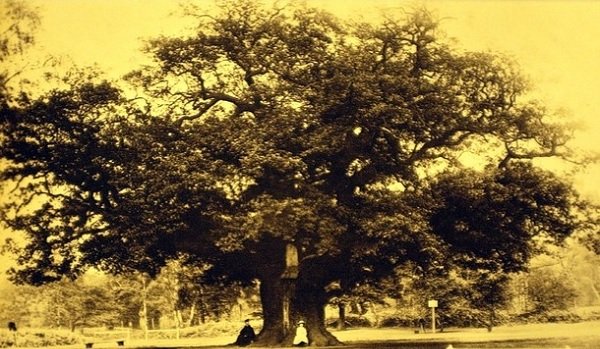 She is at least 800 years old, weighs 23 tonnes, has a 33ft waistline and relies on sticks – but this wrinkly specimen is the hot entry from Nottinghamshire in an international beauty contest.

Good luck, Major Oak, England’s newly-crowned Tree of the Year and now our representative in the arboricultural equivalent of the Miss Europe pageant.

Will she triumph in the contest next year?

Will the ailing Lonely Tree of Wales get the vote or will exotica from mainland Europe land the prize?

All will be revealed in February when the Environmental Partnership Association presides over a public vote in the European Tree of the Year contest.

So what does a tree have to do to get into this glamorous company?

“We start with a foot patrol, which happens every day,” he said.

“It’s just to make sure the tree is looking good and doing what it should be doing at that time of year.

“If there was a problem, hopefully we would pick it up at an early stage.

“The tree is fenced off to stop visitors compacting the roots.

“We get 400,000 to 500,000 visitors a year and if they were allowed right up to the trunk they would squeeze the oxygen and nutrients out of the soil, which would suffocate the tree.

“Also, water would run off the ground rather than be absorbed into it.

“We make sure it gets a good ‘pedicure’, so wood chippings are placed on the ground to prevent it from drying out in the summer and to protect it from frost and snow in winter.”

Rangers note the wildlife the tree is supporting.

Owls, woodpeckers and tree creepers have been known to nest in Major Oak, which also has a pipistrelle bat colony.

The country park is home to almost 1,000 ancient oaks.

Major Oak is the most famous. It is at least 800 years old, which means it could date from the era with which most people associate the legends of Sherwood Forest.

Even if Robin Hood never hid within its ten-metre-round trunk, it would have been a sapling at the time King John was compelled to sign Magna Carta.

But the tree could be as much as 1,000 years old, which would make it a memento of the pre-Conquest age, when the kingdom was ruled by Sweyn Forkbeard and his successor Aethelred the Unready.

Although it can generate 150,000 acorns a year from branches spreading 92 feet, Major Oak has been showing its age.

For more than a century its heavy boughs have been supported from the ground, first by poles, latterly by metal trusses.

With good husbandry, there is plenty more life in the tree, says Paul.

“There is no reason why it could not last another couple of hundred years,” he said.

“And even when it dies and starts to crumble it will still be valuable.

Councillor John Knight, committee chairman for culture, at Nottinghamshire County Council said: “We wish to thank everyone who has taken time to vote.

“We are rightly proud of our famous tree and this award is more fantastic recognition for Sherwood Forest.

“It is also significant news as we are enjoying a real year of celebration in 2014 with Sherwood Forest celebrating its 60th anniversary as a Site of Special Scientific Interest.”

The Tree of the Year awards were organised by the Woodland Trust, which in conjunction with the magazine Country Living seeks public support for a national register to protect the UK’s most important trees.

The majority of Northern Europe’s special trees are found in the UK and the charity believes these living monuments need to be officially recognised and protected, just like historic buildings.

Woodland Trust chief executive Beccy Speight said: “The number of votes and amount of interest this contest has generated really demonstrate how much people love their trees and I can’t think of a better representative for England than the Major Oak.

“We need to translate this passion into action, to ensure all our venerable old trees have the best possible support and protection to prolong their existence in the face of any threats faced.”

For more about the campaign, go online at woodlandtrust.org.uk.