Widower distraught over order to chop down tree 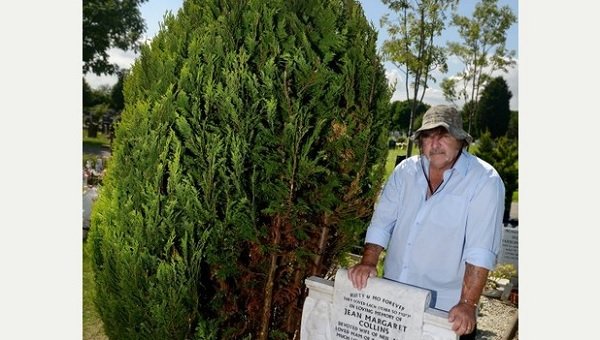 A widower says he is distraught at being forced to chop down a tree that he planted on his late wife’s grave 12 years ago.

Neil Collins, 59, of Laceby, is one of a number of grieving relatives who have been given 90 days to remove trees from Scartho cemetery. If they fail to take action, North East Lincolnshire Council’s employees will cut the trees down themselves.

Mr Collins, of Grimsby Road, said: “I went to try to cut it down the other day but I found it far too upsetting.

“My wife loved gardening and being outdoors and our children hang things on the conifer, especially at Christmas, because she loved the festive season.

“I can’t see why the tree has to go. It’s not causing any problems with her grave or any others that are nearby.

“If it was then I’d understand and cut it down instantly, but it’s not.

“It just makes the grave like a nice little garden where the family can go and remember her.”

Mum-of-two Jean Collins died following a road traffic collision in 2002, aged 47, and Neil plans to be buried alongside her when he passes away.

Mr Collins, who has a series of health problems, including six stents in his arteries and issues with his knees, spine and neck, added: “I’m gutted that the council will cut it down if I can’t bring myself to do it.

“There are loads of far more mature trees in the cemetery that are disturbing graves, so I can’t see why they don’t chop those down instead.”

A letter sent to Mr Collins by the council’s cemetery officer reads: “I am sorry to have to write to you about this sensitive issue. We have been notified that a tree has been planted on the grave space and they are not permitted due to problems they can cause.”

It states that trees can encroach on graves, affect foundations of memorials and impact on excavating for future internments, as well as making the cemetery difficult to maintain.

Councillor Dave Watson, cabinet member for environment, said: “I can confirm we have written to families about the graves in this particular section of the cemetery, asking them to remove trees that do not meet the cemetery’s regulations.

“The reason for the request is due to the trees’ root systems and the problems we are having with stability of memorials and subsidence. Other visitors to the cemetery have also complained that the trees are overgrowing on to their grave space.

“This programme will be rolled out throughout the cemetery a section at a time and anyone who needs further information or assistance should contact the council. Details of who to speak to are given on the letters.”