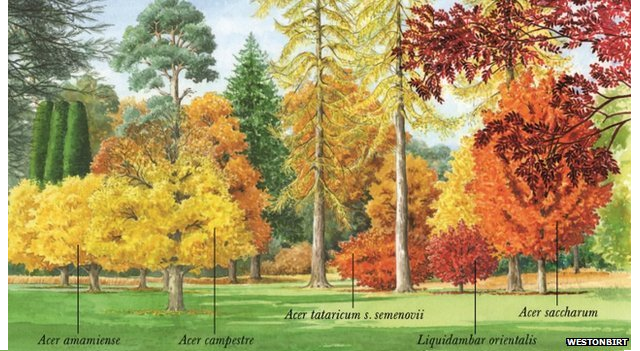 A special section of woodland is being planted at Westonbirt Arboretum to allow scientists to observe how species would cope with a milder climate.

The “2050 Glade” has been established to monitor how certain trees would perform if the UK’s temperature were to rise by four degrees Celsius.

A team from the arboretum has travelled to the USA to collect seeds which may contribute to the experiment.

Westonbirt Arboretum in Gloucestershire is managed by the Forestry Commission.

The arboretum expects changing weather conditions over the next 40 years, with hotter and drier summers and milder and wetter winters “likely”.

The arboretum’s team are in North America and will spend some of the time at the Missouri Botanical Garden in St Louis.

Dan Crowley, from Westonbirt, said: “We are hoping to collect seed from some of America’s fascinating native species, some of which are renowned for their autumn colour display.

“Collecting seed from a slightly warmer climate means as we propagate and then plant the trees we’ll be able to trial them in our growing conditions.

“We will observe which species grow well and therefore which could become more prominent in Westonbirt’s autumnal scene in the future.”

At least 10 species have been planted in the “2050 Glade” so far, including the field maple (Acer campestre) and the Kamila tree (Mallotus japonicus) and more will be added over the coming years.

Specimens will also be collected from countries that have conditions similar to Britain’s predicted future climate, including New Zealand, Japan, Australia, South America and some Mediterranean countries.