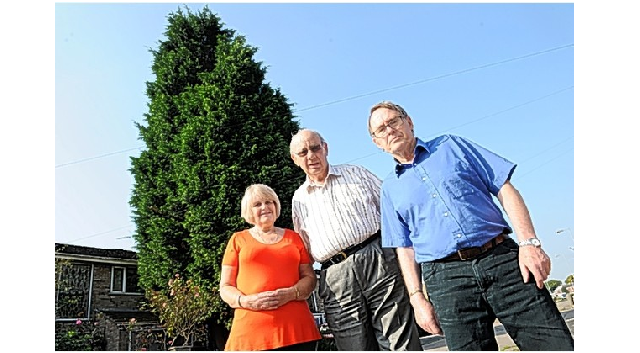 A ROW between neighbours over a 25ft conifer could soon finally be over. Clive Moss, 74, says every time there is a high wind, he and his Murrayfield Road neighbours are left terrified their properties will be damaged by a branch falling from the tree.

Now, after more than a year of neighbours asking for it to be felled, owner Richard Barry, who lives next door to Mr Moss, says he intends to have it felled on October 6.

He said: “It is a very treeless area, but I am well aware the tree is getting brittle and when we get strong winds, bits do keep coming off it, that is why I am having it removed.”

Mr Moss, of Murrayfield Road, off Chanterlands Avenue, west Hull, said: “We have had our properties damaged by parts falling off it and if it were to fall in a straight line, it would hit the house on the opposite side of the road, it is that big.

“Every time there is a high wind, we are living in fear.

“We daren’t even park our cars in our own driveways.

“If a branch were to fall on someone, it would kill them.

“We are living in a little cul-de-sac, enjoying our quiet lives, but this is ruining all that.”

During last December’s storms, Mr Moss claims a large branch fell from the tree and damaged the roof of his garage.

It also narrowly missed the car belonging to residents on the other side of the house and it is currently over-growing and blocking the streetlight.

Mr Moss, along with the residents of the house on the other side of Mr Barry’s property, say they have written to Hull City Council to request a felling order, but when they call the council’s forestry department for an update, they are told it is already “with the legal department”.

However, the council has confirmed there is no order to fell the tree, nor is there a tree preservation order, which would protect it from being destroyed.

Retired Mr Moss, who has lived there for 36 years, said: “The weather is coming on, we had high winds just a few weeks ago.

“We are frightened, it shouldn’t be there.

“It is ridiculous situation and we shouldn’t have had to live like this.

“This has been going on for long enough.

“Let’s just hope it does get felled now.”

‘They need to resolve this themselves’

A city council spokesman said: “As there are three residents in private properties, they need to resolve this themselves.

“However, if we are made aware by a private landowner that a tree on other private land is dangerous and upon agreeing with that assessment as a council, we can issue a notice to the owner requiring them to fell the tree or do lesser works sufficient to remove the danger.”