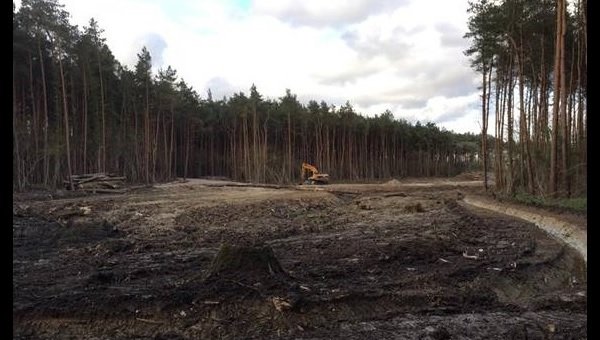 A wealthy landowner who illegally cut down hundreds of trees in the South Downs is being forced to replant them.

He has since burnt much of the wood and imported and laid hardcore.

After his actions were highlighted in the press, he retrospectively applied for permission for the felling.

But the Forestry Commission told The Argus that officials will refuse his application and instead force Mr Hyatt to replant the trees.

– Mid Sussex District Council (MSDC) initially allowed him to continue felling after he told officials he was creating a Christmas tree plantation.

– He was served with nine planning enforcement notices for breaches in building his own home in nearby Bolney.

– While protesters were trying to put a stop to the illegal felling, Mr Hyatt was performing at the Queen’s 90th birthday celebrations.

Residents raised concerns with MSDC on March 21 and officers visited the site.

Mr Hyatt told them he was creating a Christmas tree plantation – which the council said did not require permission – and he was allowed to continue.

It was not until May 10, by which time 13 acres had been felled, that the South Downs National Park Authority (SDNPA) issued a stop notice.

Campaigners, who held a protest against the felling while Mr Hyatt was performing for the Queen at Windsor Castle because of his involvement in the world of horse-drawn carriages, have criticised the response of the authorities.

A spokeswoman for the Save Pondtail Wood Campaign, said: “We question why it still took until May 10 – weeks and weeks during which the wood was destroyed – to issue a stop notice on the site?”

Dr Tony Whitbread, chief executive of Sussex Wildlife Trust, called for a strong response to act as a warning to others.

He said: “We won the battle to protect them nearly three decades ago.

“It is unthinkable therefore, that the act of vandalism we see in Sussex should be left unchallenged.  Especially as it happened in Britain’s newest National Park.”

The Forestry Commission (FC) issued the replanting notice to Mr Hyatt on May 25, calling on him to make the changes by the end of April 2017.

The notice, which was attached to the gates of the property, only to be later taken down, calls on him to replant no fewer than 625 broadleave trees including 40 per cent English Oaks.

The order also requires him to protect and maintain the trees for 10 years after planting.

A spokeswoman for the FC added: “We are also considering other legal options available to us, and our response to the part of the felling licence application which applies to trees still standing.”

MSDC said it was working with the SDNP and the FC and it would continue to monitor the situation.