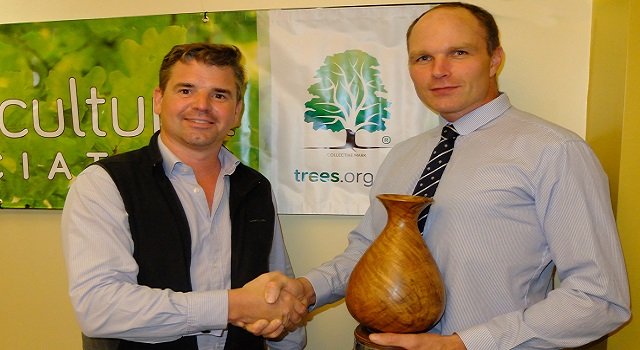 A tree consultant on the Isle of Wight, has been awarded the annual RFS /Lockhart Garratt award for excellence in what is commonly considered the toughest qualification for arboriculture.

Wayne Isaacson completed the ABC Level 6 Diploma in the prescribed two-year time scale despite having to make 25 return journeys on a ferry through two winters to get to his centre of study at Westonbirt Arboretum in Gloucestershire.

RFS Chair Ian Dudley said: “The RFS has enjoyed a strong connection with arboriculture since the inception of the organisation in 1882 when it was originally known as The English Arboricultural Society. 134 years later the RFS is delighted to continue this strong connection by recognising Wayne Isaacson’s fantastic achievement as the best student in the Level 6 Diploma in Arboriculture.“

Wayne was inspired to work with trees after a friend, who owned a firewood business, introduced him to tree felling. He later worked for a local contractor as a tree surgeon and then set up what is now Wayne Isaacson Tree Consultancy Ltd. Studying in his spare time, Wayne gained the respected RFS Certificate in Arboriculture and the Arboricultural Associations’ Technician’s Certificate.

Wayne said: “Achieving the Level Six Diploma in Arboriculture involved an immense amount of work, but I furthered my knowledge about trees, everything from tree biology to tree management at a strategic level. Having this qualification means that I can provide superior advice.”

His tutor Dave Dowson commented: “This is a degree equivalent qualification where professional competence at 100% is required in order to gain a pass in a very wide arboricultural syllabus thereby demonstrating great individual and academic achievement. The overall commitment shown by Wayne makes him an exceptional student and a very worthy recipient of this year’s award.”