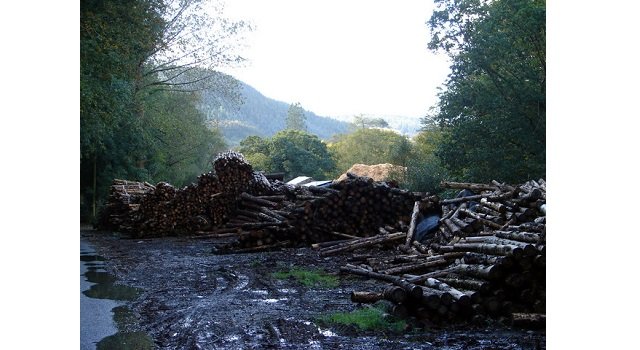 Wales needs to plant more trees to protect the home grown timber industry, one of the UK’s largest fencing producers has warned.

The Welsh Government’s target is 2,000 hectares a year.

But Clifford Jones’ purchasing director Penny Lloyd said timber planting was now “vital for the survival of our industry”.

The company produces 2.5 million fence posts at its plant in Ruthin and also in Scotland, and employs over 80 staff.

According to Welsh Government figures, the wood manufacturing industry in Wales is worth nearly £175m a year – and combined with forestry, provides work for up to 11,000 people.

“There’s a huge market for our timber. Every sawmill in Wales would double or treble production if the timber was there to feed that mill,” said the Clifford Jones chairman Richard Jones.

“We are constantly looking at ways of diversifying so that we get the maximum from the timber we bring in through the gates but that is in increasingly short supply because of lack of investment since the 1990s.”

Natural Resources Wales has insisted it is committed to helping the industry.

“This year we are restocking more than 1,200 hectares of the Welsh woodland estate – which compares favourably with any of the previous five years,” said Ruth Jenkins, head of natural resource planning at NRW.

“In that time, we have had to deal with a massive outbreak of P ramorum, which has had a devastating effect on Welsh forests – proportionately more than the rest of the UK – but we are responding to this by creating a far more diverse and resilient woodland.

“During this time we have worked closely with the timber industry to create new markets for the additional larch which has come to the market.”

The copyright on this image is owned by OLU and is licensed for reuse under the Creative Commons Attribution-ShareAlike 2.0 license