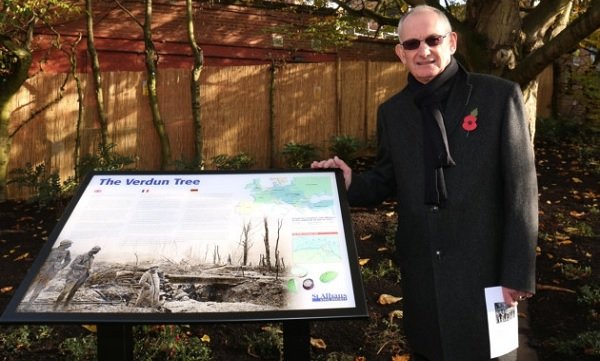 A very special tree planted in St Albans to commemorate one of the bloodiest battles of the First World War now has an information panel to explain its significance.

St Albans’ Verdun Tree was at the heart of a ceremony held in Waxhouse Gate, High Street, on Armistice Day for the official unveiling of the panel, marking the 100th anniversary of the Battle of Verdun.

The tree was one of 20 grown by a Reading horticulturalist from seeds from the only surviving tree on the French battlefield.

It was planted on January 18, 1976, by 87-year-old Gordon Fisher, a local ‘Old Contemptible’, the term used by those in the British Expeditionary Force which served in Flanders within range of the enemy mobile artillery between August 5 and November 22, 1914.

The horse chestnut was grown from a conker collected from a tree in Verdun – the only one to survive the tragic battle which took place there in 1916 and obliterated the rest of the landscape.

A quarter of a million French and German troops lost their lives in the battle, the longest and one of the bloodiest of the First World War.

The tree serves as a memorial to all those who died, and can be seen at the rear of the Village Arcade.

Bryan Hanlon, membership secretary of St Albans Civic Society, said that the project to acknowledge the tree’s significance began about eight years ago.

He said: “Our tree isn’t unique, but we are proud of it. We had brilliant blue sky during the ceremony; it was perfect. We thought that Armistice Day was the most appropriate time to unveil the panel, which has information translated into French and German.”

The district council installed the panel, and it was unveiled by St Albans Mayor, Cllr Frances Leonard.

Members of the St Albans branch of the Legion attended the ceremony, along with representatives of the Civic Society and the council’s portfolio holder for heritage, Cllr Annie Brewster.

Cllr Brewster said: “The Verdun Tree is a wonderful historical monument in the very heart of our city that has not received the interest it deserves.

“This smart new information panel puts it firmly in the spotlight and brings the moving story behind the tree back to life. It will be read by many thousands of people in the years to come.

“The Civic Society is to be congratulated for the work it has done to ensure the only tree that survived the battle is now going to get more attention. It is fitting that this panel was unveiled on Remembrance Day and in the centenary of the battle itself.”

Redbourn author Kate Bretherton, in her book The Remarkable Trees of St Albans,describes the tree’s show of flower buds, large leaves and masses of flowers as like a “magician producing strings of silk handkerchiefs out of a hat”.

She said that the horse chestnut was an appropriate tree to represent a battle as, in both wars, starch from conkers was used to produce acetone, required to gelatinise the mixture of guncotton, nitroglycerine and petroleum jelly that made up cordite, an explosive.