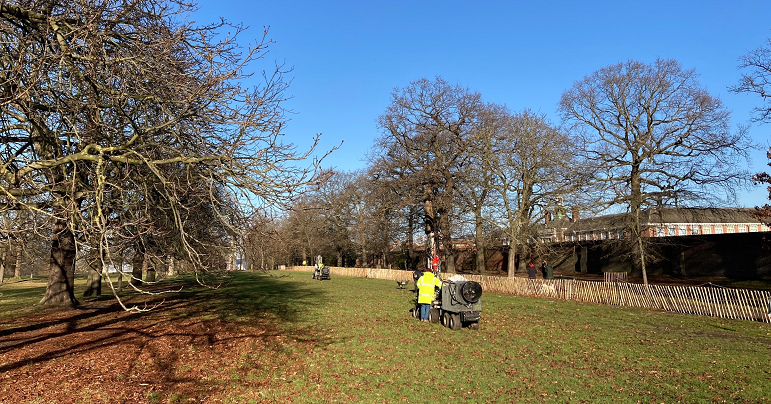 The oldest enclosed Royal Park, Greenwich, covers 74ha on top of a hill where visitors enjoy sweeping views across the River Thames to St Paul’s Cathedral and beyond. There has been a settlement on the site since Roman times, and Greenwich has always had a strong association with royalty. Historic tree areas date from 1660 when Charles II was king and eleven original trees from the period can be found in the park. In 2019, the park had over five million visitors and with its view and attractions – there’s even a Saxon burial mound – it is no wonder when the pandemic struck there was a massive increase in visitors in the first year of lockdown.

“It was like bank holiday every day,” says Adam Stoter, Greenwich Park’s technical officer. “Greenwich Park offered an open-air space when there were few places people could go. The trouble was, the added footfall compounded the growing problem of compaction in and around the tree areas.”

The Royal Parks’ flagship project ‘Greenwich Park Revealed’ had already begun to restore the 590-year-old park to protect and share its heritage. They aim to go above and beyond in tree care and management and it was a natural progression to bring in the specialist services of Terrain Aeration’s Tree Division. The company has been treating tree areas in Royal Parks for many years and, in the case of Greenwich this year, applied their technology across 15,000 square metres. Where there is heavy compaction it is essential to break up the soil at a depth greater than the tree roots, other than the main tap roots which go straight down, to allow excess water to drain away and help stop anaerobic conditions and rotting of the root system.

The Terrain Aeration Terralift machine sends a probe to a depth of one metre where compressed air is released to a maximum of 20Bar (280psi). This blast of air fractures the soil and creates fissures which interlink as the Terralift repeats the process on a grid system of two-metre spacings. As the probe withdraws at the end of the air blast, dried seaweed is injected which sticks to the fissure walls, expanding and contracting with moisture content in the soil to keep the area ’breathing’. In most cases, the area treated will be one-metre inside and one-metre outside the canopy drip line to reach beyond the growing roots, increasing the percentage of oxygen intake and allow maximum drainage. In all, Terrain Aeration treated around 15,000 square metres to help ensure the future of the historic tree areas where visitors will literally walk on air.