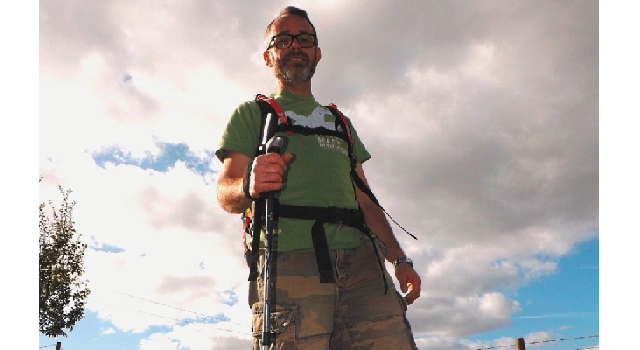 A Malvern man is set to put his best foot forward to help bring an ancient woodland back to life by tackling a 120-mile charity walk.

Pete Longley is hoping to generate £1,000 for Worcestershire Wildlife Trust to restore Blackhouse Wood and has set himself an endurance challenge in a bid to reach his target.

Today (Friday 2 October), the 44-year-old will set off from his home in Alfrick Pound and walk 15.5miles to Monkwood near Sinton Green. He will then spend the next six days, trekking across the county and visiting many nature reserves before finishing at Blackhouse Wood on Thursday (October 8).

Mr Longley, who also intends to swim across the Severn in Kempsey on the morning of his final day, said he came up with the idea after the Trust launched an appeal to raise £200,000 to secure the site.

Although the charity purchased it earlier this month, it still needs £50,000 to begin its restoration project and Mr Longley said he was determined to help.

“I live half a mile away from Blackhouse Wood, so it was absolutely fantastic news when I heard the Trust had secured it,” he said.

“But they need a considerable sum of money to start the restoration which could bring quite a large part of the ridge back to life.”

He added: “I am not a big walker, but I used to do an awful lot of rock climbing and mountaineering.

“I have also been doing a lot of running as I did ten miles this morning and I did the Malvern half marathon earlier in the year as part of my preparations.”

The initial cost of the restoration is believed to be about £50,000 which includes wildlife surveying, felling some of the conifers and replanting with native trees.

The Trust also wants to restore the lime pollards throughout the woodland as well as undertaking ‘essential’ work on some of the tracks to make the wood more accessible for visitors.

Wendy Carter, communications manager at the Trust, said: “We’re really pleased that Pete has decided to take a very long walk to help raise funds for and awareness of our newest nature reserve.

“The purchase of Blackhouse Wood followed was our most successful appeal ever, with more than £200,000 raised from members of the public and grant-awarding bodies.

“But the hard work doesn’t end with buying the wood – we’ve now got lots to do to restore it back to its former glory and Pete’s walk will really help with this.”