Voting starts in tree’s ‘Eurovision’ with hope for Powys win 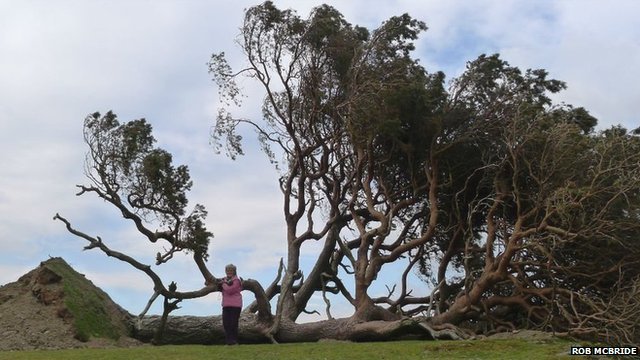 Voting is getting under way in a competition dubbed the “Eurovision for trees”, with hopes that a 200-year-old Powys tree will win.

People visit the Scots pine on a hilltop to carve their initials, propose marriage or scatter ashes.

It was nearly destroyed in last winter’s storms.

In February, the tree was blown down in gales but the community came together to tip 30 tonnes of soil over the roots and there are hopes it will continue to live and grow from a reclining position.

Other trees in the running are Sherwood Forest’s Major Oak- reputedly used as a hideout by Robin Hood and his merry men – and a pine tree believed to resemble a five-headed dragon in the Czech Republic.

Tree campaigner Rob McBride, who is promoting the Welsh entry, said: “It’s like a Eurovision for trees – but without the bad music.”

The competition, sponsored by the Environmental Partnership Association (EPA), a group backed by the European Commission, will announce the winner of the 2015 online vote in March.