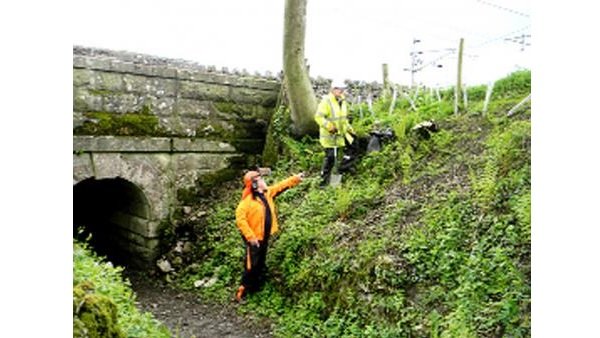 VOLUNTEERS have planted 400 bushes and shrubs over the past year as part of the restoration of the Lancaster Canal between Stainton Crossing and Sellet Hall Bridges.

While engineers are hard at work restoring the canal bed, an arboreal team has been giving the Hincaster Tunnel and Horse Path — both listed ancient monuments — some tender loving care.

The team has been cutting away unwanted scrub and planting bushes and shrubs along this section, with 350 planted up to the tunnel and another 50 beyond.

A line of sweet chestnuts was also planted north of Hincaster Tunnel to commemorate soldiers killed in WWI.

Lancaster Canal Trust is working with Hincaster Parish Council to commission a suitable plaque to record this.

Completing the first year of substantial planting, team leader Trevor Cotton said “The team have worked their socks off in all weathers over the past few months, sometimes having to spend time clearing pathways and repairing drystone walls before any planting could be done. I am very proud of them.”

Always a popular walk, the Horse Path is now attracting more attention, with walkers stopping to compliment the volunteers for all their nature loving endeavours.

School trips in the area are also becoming very successful with wildlife studies fitting well into the school curriculum.

Work began on this section of the canal three years ago and Frank Sanderson, of the Lancaster Canal Trust, estimates that the stretch between Stainton Crossing and Sellet Hall should be ‘in water’ at the end of 2014.

Mr Sanderson said: “It is taking us a while but there is an awful lot of work going on in this area and it will be perfect for wildlife.”