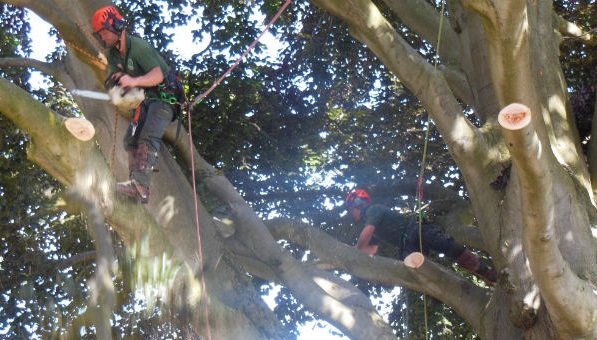 If trees could talk, the iconic copper beech in Montpellier would tell stories of the two World Wars and Cheltenham’s history.

Work started this morning on bringing down the large beech tree in Montpellier Gardens, which has overlooked the regency town for more than 200 years.

But when a large branch fell off unexpectedly on June 26, investigations by tree officers found its trunk decayed and in rude health.

Using chainsaws, they started removing branches on the tree, limb by limb. Huge branches crashed through the foliage, before workers on the ground hacked them up and put them through a grinder.

Christopher Chavasse, senior tree officer at Cheltenham Borough Council, said the tree had fallen victim to a serious fungus infection, called Ganoderma adspersum. The large decay mushrooms on the eastern and northern sides of the trunk are clearly visible, a sign of the infection.

He said: “This is by far the biggest tree we’ve had to fell in my 13 years here.

“I’m sure the area will look a lot bigger when the tree is gone, but it will be very sad to see it go.

“It’s a chance for something new to be put here. Three weeks ago, the limb fell without warning and that was the second one in the last 18 months.

“It was something we had to look at quite quickly, because it was becoming dangerous.”

Work is set to go on for two days while contractors remove the foliage before felling the huge tree, which is 23 metres (75ft) in diameter.

Matthew Reeve-Crook, who lives opposite the park, said: “It’s such a striking attraction, and so many people stop to admire the tree when they come to the park.

“It’s a focal point for the gardens, and it would be devastating to see it go.

“It’s a shame, and it’s the one tree here that has so much character, but I understand why it has to go. It has to be done.”

Patrick Morrissey, from Sandhurst, was reading at a nearby bench. He visits Cheltenham once a year, and spends that time at the gardens.

He said: “It’s a lovely tree, certainly very huge. I don’t think it’s too dangerous, not unless someone is seating beneth it.

“It will be a real shame to see it go, it has become iconic of these gardens and of Cheltenham.”

The tree had been planted to commemorate the Battle of Trafalgar, and the Borough Council put protective fencing around it in January 2013 to try and prolong the life of the tree.

Sir Robert Wright, chairman of the Friends of Montpellier Bandstand and Gardens (FOMBAG), said: “The recent falling of a major branch is a warning sign that cannot be ignored and we are aware that on occasions teenagers go inside the fencing around the area.

“Although sorry to see the end of its life, we fully support the decision to remove the tree.”

A spokesman for Cheltenham Tree Group said: “We are very sad the Montpellier beech has to be removed, but it would be worse to see this magnificent tree deteriorate further.”