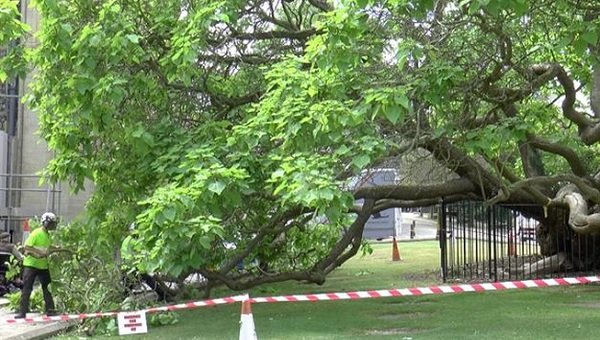 It has stood in the heart of Rochester for more than a century, but today tree surgeons were busy cutting back branches after the iconic Catalpa tree split in half.

The American Indian bean tree, which stands between the cathedral and the castle is believed to be the oldest of its kind in England.

People passing by the 150-year-old tree this morning, would have seen that half the tree closest to the cathedral had fallen over and was blocking the pathway.

The trunk of the tree appears to have split in two.

Stuart Tranter, ward councillor for Rochester West, remembers having his photo taken on the tree more than 50 year ago.

He said: “It’s iconic for Rochester and for the Medway Towns as a whole, it’s part of the cathedral and the general street scene here.

“At the moment the priority is safety. The professionals will look at it to make sure we don’t cut any more that we need to and then we’ll be discussing the next steps and how to look after it as best we can.”

It is unknown what caused it to split but tree surgeons told Cllr Tranter that the centre of the trunk is rotten.

Former Mayor of Medway, Sue Haydock, started an appeal to raise money to save the tree when she was a ward councillor.

She said: “This is totally unexpected, I guess it must be the weight of the branches that hadn’t been propped up which is something we were going to be meeting about in the next couple of weeks. This has pre-empted that.

“Hopefully with what’s still left, with a bit of treatment or the exposed wood, a bit of pruning, a bit more propping, we should hopefully save the tree.”

A Medway Council spokesperson said: “We are arranging for remedial tree works today to ensure the tree is safe and these works will continue until tomorrow.”