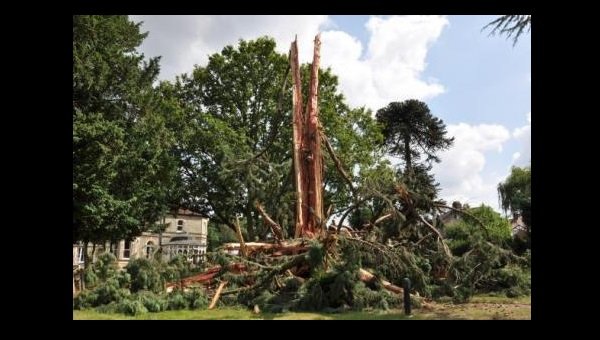 A tree in Beckenham planted in the Victorian times has been left completely destroyed after being hit by a powerful bolt of lightning.

The 100ft Californian Red Wood was struck in the early hours of Saturday morning, leaving it split in two and effectively felled.

The tree is around 150 years-old and has stood in the grounds of Oakfield House in South Eden Park Road since the property was built in 1870.

Owner John Deane, 63, says he heard an almighty boom when the lightning hit and is “devastated” it was so badly damaged.

He explained: “We heard it but didn’t see the full extent of what had happened until the morning. My tree surgeon said, ‘well that’s gone hasn’t it’, when he came round to have a look.

“It was a major attraction in our grounds.”