Leicester trees to be felled for a new cycle lane 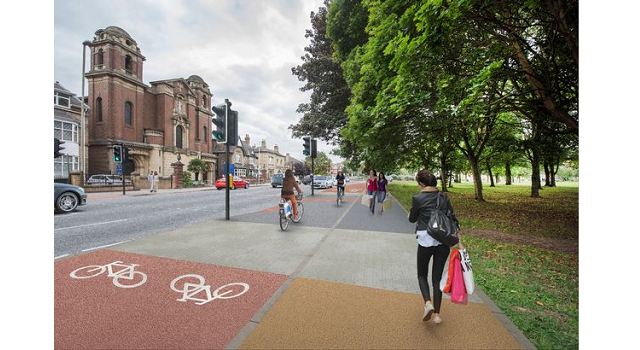 Campaigners say it is unacceptable and unnecessary to fell 18 trees to create a new cycle lane along Leicester’s London Road.

The city council has said the trees, on the edge of Victoria Park, may have to be removed as part of their £2.9 million plans to put a two way cycle lane and a widened footpath along the A6 into the city centre.

The council says it would replant any felled trees nearby but the Leicester Civic Society has said the loss of the mature specimens would have a harmful environmental impact.

“Leicester claims to be the ‘Environment City’ and in many respects trees are the most important part of that environment.

“In the interests of our health and well-being Leicester City Council is quite correctly working towards improved facilities for cyclists and pedestrians, whilst seeking to control car use.

“As a natural part of this process the city’s trees are busy endlessly absorbing carbon dioxide and breathing out oxygen in large quantities.

“The felling of trees is also unnecessary.”

He said it was unlikely cyclists would use the section by Victoria Park in any case.

“They will just continue cycling along the path between Evington Road and Mayfield Road as they do now.

The council has asked for comments on it proposed scheme, which includes a potential short stay drop off for cars at the railway station.

Officials may amend the plans depending on what suggestions and comments are made.The consultation ends on November 10.