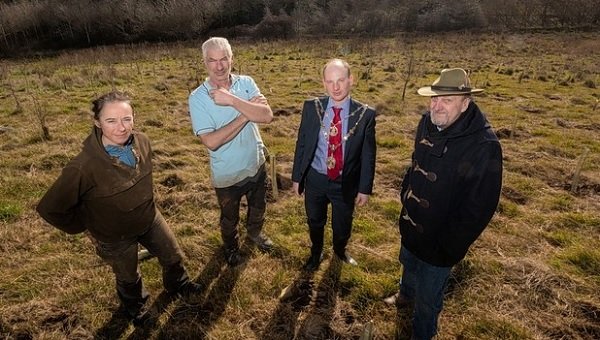 A project planting thousands of trees to create a forest has had to replant hundreds of its saplings after they came under attack from voles.

The rodents have been using the space below roots of the trees at the Forest of Moresk at Park Farm in Truro to hide from predators. But while they are protected they nibble at the roots, killing the young trees in the process.

So this week the team behind the project has been planting hundreds more young trees to beat the voles.

Joining the forest rangers was Truro Mayor and Moresk councillor Loic Rich, who has supported the scheme. The Forest of Moresk project has been running for 13 years and is aiming to plant 170,000 trees.

Landowner Colin Parker, who has led the project, said that while the grants which were available to support such undertakings were not vast, he remained proud of the work done.

He said: “We get a planting grant from the Forestry Commission but that hasn’t changed in the 12 years we have been receiving it – it barely paid for the planting 12 years ago and it really doesn’t now.

“Defra (the Department for the Environment, Food and Rural Affairs) also pay a maintenance grant which is based on the farm rental value but that hasn’t really changed either and doesn’t cover our costs.

“I am glad that we have continued with the forest as it is a legacy that we can leave behind.”

As well as the thousands of trees, the Forest of Moresk also provides space for educational project Camp Kernow and will provide 60 allotments for residents in the city.

The project has also created 10 wildlife ponds which Mr Parker said have been made “at our expense”.

He said: “We have had great support from Truro City Council and Cornwall Council for the forest and are pleased with how it has progressed.”

However, he added that he hoped that more people would venture into the forest and enjoy the natural environment.

“We don’t really see many people up here unless they are being dragged up by a dog,” he added.

“Even on a good day it is rare to see people and it would be great to know that the public is getting some use from the forest.”