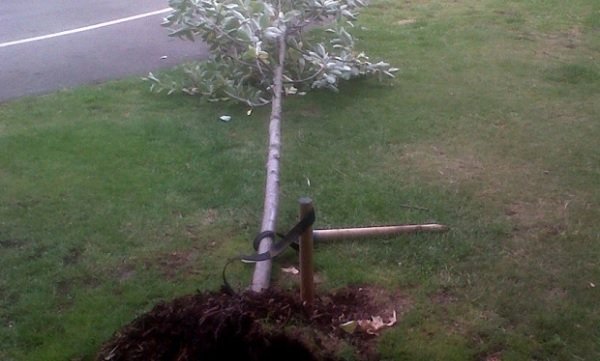 Vandals have ripped out young trees and shrubs in West Park at Long Eaton during a mindless attack.

Two whitebeam trees were ripped out and destroyed during the rampage in the planting area alongside the skatepark, while shrubs in the same woodland planting spot were also pulled out and dumped in a nearby brook.

Three other whitebeams that were left bent over and cracked after the attack have been re-staked but are in poor condition and may not survive.

Erewash Borough Council has reported the vandalism to police and has appealed to residents to help find those responsible.

It is the second time the planting area has been vandalised and the row of whitebeams were just getting established after they were planted to replace trees that were vandalised in the same spot last year.

He said: “This is an utter disgrace and we know all those who love this fantastic park will share our outrage and despair at this appalling vandalism.
“These were lovely young trees and shrubs and now some mindless vandals have torn the heart out of that woodland planting.

“If the re-staked ones don’t survive, it will cost us up to £1,000 in total for new trees and staff time to re-do the lovely planting scheme.

“We are committed to ensuring this flagship park remains a family favourite and we will continue to develop it. The vandals will not win and we urge everyone to help us in our fight against vandalism by getting in touch with the police if they know who is responsible.”