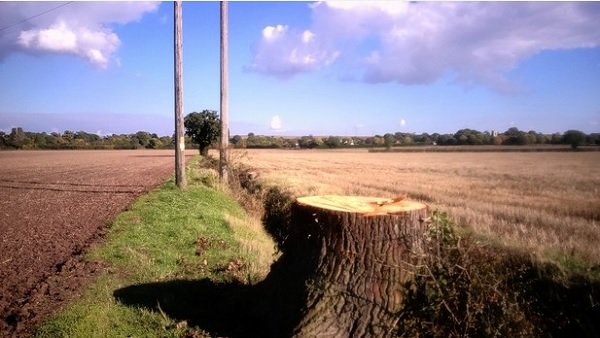 Two “landmark” Retford oak trees aged between 150-200 years have been chopped down, causing anger among some local residents.

The two trees in Scotter Lane, Hayton, faced the chainsaw last month because of their proximity to nearby power lines, according to Western Power who commissioned the work.

David Otter, who is a Hayton parish councillor and tree surgeon of 45 years, does not believe it was necessary to fell the trees.

“They have been landmarks in Hayton for many, many years,” said David.

“As an experienced tree man I know it’s not necessary.

“It is often enough to cut the trees back so they wouldn’t interfere with the power lines. It is cheaper and easier just to fell them.

“If they continue to do this many trees are going to be felled for no good reason.”

Mr Otter said that thousands of different species of insects and animals rely upon the oak tree.

“The oak tree is so important to the environment and vitally important for the ecosystem,” he said.

“But at least they have offered to do something.”

At the request of the parish council, Western Power say they would be happy to plant some saplings to redress the balance.

A spokesman said: “We use a company called Ground Control to carry out storm resistance and resource management of trees, and they carry out surveys to establish if there is any risk of trees falling onto lines.

“It was established that in a storm the trees could fall on to the 33,000 volt line which provides power to a considerable number of people.

“We liaised with the landowner and they consented that we should fell the trees.”

The footpath warden for Hayton Parish Council, Howard Oates, said they plan to measure the distance between the trees and the power lines to ensure the information Western Power provided is accurate.

“It’s 200 years of heritage gone with a chainsaw. With some judicious pruning it could have been avoided,” said Howard.
source