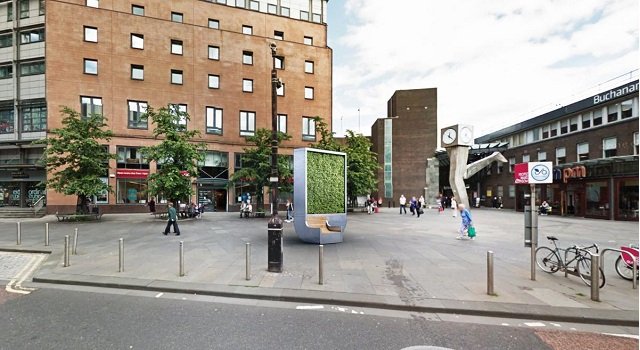 Two moss covered structures are to be installed in the city centre in a bid to help air pollution levels.

They will be sited near GOMA and Buchanan Street bus station and will have the same benefit as planting 550 trees.

Known as CityTrees, they are covered in a moss like plant which sucks potentially deadly nitrates which cause respiratory and heart disease from the air.

The £40,000 cost of the two structures has been provided by the Scottish Government and the city council.

They are being put in place in advance of the UK’s first National Clean Air Day on Thursday.

The CityTrees, which have planning permission to remain in place until 2018, are free standing and require no ground works.

They use rain water for irrigation and photovoltaic cells to power the necessary technology and environmental sensors.

Royal Exchange Square and Killermont Street were chosen as locations as they are close to busy streets with a significant level of pedestrian activity.

A city council report says: “This makes them ideal locations for raising awareness of the tree and what it represents – air quality.”

Seating on either side of the CityTrees will ensure they are stable.

Anna Richardson, the city council’s sustainability and carbon reduction convener, said: “We have set a target of making Glasgow one of Europe’s most sustainable cities and the arrival of the CityTree is a massive boost.

“This is an impressive piece of infrastructure which uses integrated technology to feed information to the public about the surrounding environment while its special moss filters pollutants and improves the quality of the air around us.

“Pollution affects some of the most vulnerable people in our city, including the old, the sick and those experiencing poverty.

“There is a wealth of evidence to show cities that prioritise healthy, liveable streets benefit not only from better health outcomes but from more resilient economies and reduced inequality. That is the goal.

“Each CityTree has an environmental impact equal to 275 trees and the technology installed allows the public to access air quality and climatic information.

“The council is encouraging the public to take a CityTree selfie and pledge to do something environmentally friendly on National Clean Air Day.”

Last year, Hope Street was one of the most polluted street in Scotland with nitrogen dioxide at 65 microgrammes per cubic metre – the European directive is 40 microgrammes.

The city was named as one of the worst UK cities for air pollution by the World Health Organisation.