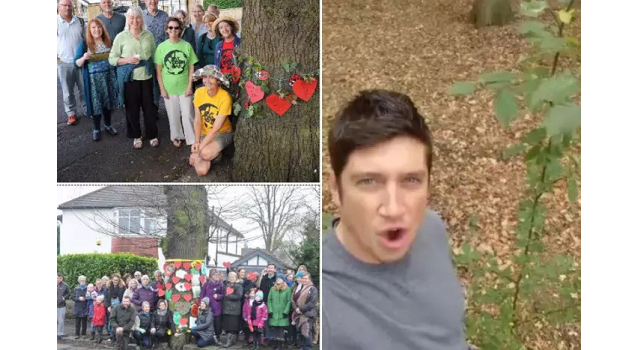 TV presenter Vernon Kay has thrown his weight behind a campaign to save a Sheffield tree up for the axe, with video released on his Twitter.

The Bolton-born star, more commonly known for his work on All Star Family Fortunes and T4, has denounced Sheffield Council in its bid to chop down the Vernon Oak on Vernon Road in Dore.

The tree is just one of many earmarked in the long-running felling saga between Sheffield Council, contractor Amey and campaigners who are fighting to save it. The Vernon Oak was nominated for the Sheffield Tree of the Year 2017.

The council says the felling and replacement of 6,000 of the city’s 36,000 street trees is necessary, but campaigners say there are ways to save healthy trees within the Streets Ahead contract.

In a video message on his Twitter, Mr Kay said he had been told about the tree ‘in his namesake’ and decided to speak out. He said he ‘didn’t know all the facts and figures’ but called on the council to come to a solution.

Stood in a woodland close to his home and referencing a newly planted sapling, he said: “That tree (Vernon Oak) used to this big because it’s a massive strong oak – probably over one hundred years old and has witnessed the evolution of Sheffield.

“But a group of people who sit on the council have decided to chop it down. if that tree wasn’t chopped down, it would out-live everyone in Sheffield. Imagine the generations that have walked past, driven past and looked at that tree.

“But because it’s no longer suitable because the pavements is a bit wonky by all accounts, they’re going to cut it down along with a whole bunch of trees which is a travesty because trees are the lungs of the planet – everyone knows that.”

Mr Kay urged his 1.28 million followers to keep up to date with the tree saga and urged people to back campaigners. Addressing local authority bosses directly, he added: “Sheffield Council – come on. It’s only a pavement I’m sure you’ve got a few quid somewhere that you can redesign the pavement around that tree that’s been in Sheffield longer than everyone in Sheffield.”