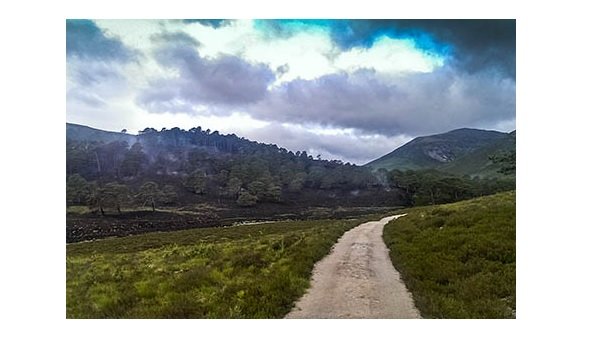 A wildfire that engulfed part of a National Trust for Scotland estate in the Cairngorms was probably started by careless use of a barbecue.

The blaze erupted on the Mar Lodge Estate near Braemar and was brought under control by firefighters and estate workers.

About 10ha (25 acres) of the 72,000ha estate was affected by the fire, which destroyed blaeberry and scrub undergrowth among tracts of mature Caledonian pinewoods. The NTS said damage to mature trees appears limited as the fire does not appear to have reached canopy level.

Crews from the Scottish Fire and Rescue Service were joined by NTS estate staff and workers from neighbouring estates Invercauld, Balmoral, Mar and Glen Tanar.

They managed to bring the fire in Glen Lui under control by 7pm.

At its height, the wildfire was being fought by 11 fire crews using 10 appliances drawn from across the North of Scotland, aided by 14 NTS staff and 15 staff from the surrounding privately owned estates.

A helicopter was used to water-bomb the blaze and ambulances were placed on standby.

David Frew, the National Trust for Scotland’s property manager for the Mar Lodge Estate said: “We are extremely grateful to the consummately professional crews from SFRS and to our neighbours and friends from other estates for their help.

“They have ensured that the wildfire was brought under control as quickly as possible and that there were no casualties.

“It is frustrating to report that there is a very high likelihood the fire was caused by carelessness. The cause of ignition appears to be a fire at a campsite where we found an abandoned barbecue grate.

“This is a completely needless situation and a reminder that anyone embarking on a trip into the countryside, particularly during a dry warm spell, must take care and avoid the use of open flames.

“It seems we have been relatively fortunate as things could have been a lot worse. Some patches are still smouldering, and ongoing dry and breezy conditions for the next few days might lead to re-ignition and we are remaining vigilant for that reason.

“The best thing visitors can do in the meantime is to use their common sense and follow well publicised good practice if they plan to camp out in the area.”

The NTS said Mar Lodge Estate is one of the most heavily designated areas in Scotland for its natural beauty and ecological diversity, and recently featured in the BBC’s Winterwatch. Glen Lui is a particularly popular area for camping within the estate, it said.

Will Boyd Wallis, the Cairngorm National Park Authority’s head of land management and conservation said: “The Cairngorms national park is an extremely important place for nature and wildlife so the message from us is really quite simple: never light a fire during long dry spells of weather or in woodland or on peaty soil.

“We want people to enjoy the Cairngorms national park and have a great holiday but not at the expense of our wildlife and the important habitats that support them.”

The trust said it believed most of the trees were only scorched and there is a good chance that the low lying undergrowth will regenerate naturally.