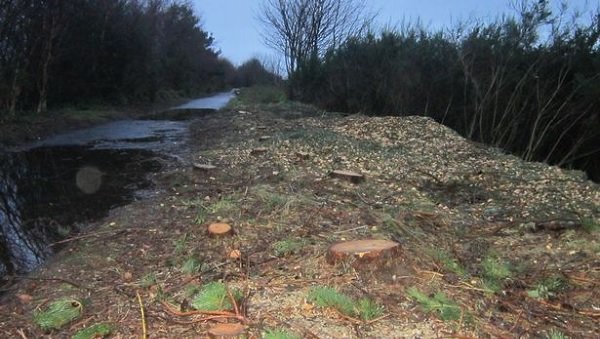 Dozens of mature trees have been chopped without warning at a popular beauty spot.

Silver birch, Scots pines and sycamore up to 25 years old have been scythed – to put in new cabling.

Sections of the previously shady route between Craigend Road and Willockston Road in Troon are now open to the golf course.

This week South Ayrshire Council said it was not to blame – but a “utility” company putting in a new cable.

Lengths of protective tubing left at the site point to a phone or internet company that has carried out the mass chopping.

Cyclist James Peterson filmed the route from his bike after being contacted by an upset local.

He said: “It is very popular with dog walkers and cyclists because it is so beautiful, with trees lining either side.

“Years ago the council spent a lot of money planting those trees which give shelter from the weather and from golf balls which frequently rain down.

“I was absolutely horrified at what I found.

“It would have been preferable to dig up the cycle track and the cable laid underneath in order to save the trees.”

And Elizabeth Williams added: “I saw this when out walking our dog. Swathes of trees just gone.”

This week South Ayrshire Council promised to find out who cut the trees.

A spokeswoman said: “It wasn’t the council that cut down the trees – I understand it was a utility company.”