Tributes at the Royal Welsh Show and the Great Yorkshire Show 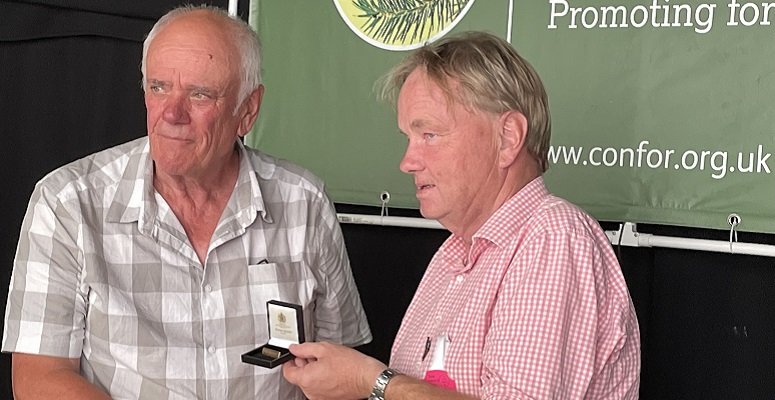 There were special tributes at the Royal Welsh Show and the Great Yorkshire Show to two great foresters.

At the Royal Welsh Show, Terrence (Terry) Bailey received a bar for 45 years’ service with the Llanarth estate in South East Wales. He had previously received a medial for long service in 2007.

He had joined the estate as a forestry worker. Over the years he progressed to Head Forester, responsible for the day-to -day management of 1100 acres of mixed and diverse forestry.

Terry retired in August 2020. He said: “Forestry is not for the faint hearted, and is a long term project. The results and mistakes of your labours are witnessed when you are no longer around! However, it is very rewarding to be involved in the establishment of new plantations, witness them flourish and leave something for future generations.”

Ben Herbert, Trustee of Llanarth Estate, and RFS President elect, commented: “Terry’s extensive knowledge and experience has been invaluable over the years. He has shared his knowledge with others and enabled the forestry operations on the Estate to operate in both a commercially and efficient way. It gives me great pleasure to see forestry plantations that Terry has been responsible for flourish and receive awards from The Royal Welsh Agricultural Society.”

At the Great Yorkshire Show, Philip Bathgate was presented with an Award after 50 years’ service at the Netherwitton Estate in Northumberland.

When he started as a woodman on the estate he had never used a chainsaw. He retired having been Head Woodman for 30 years!

Over many decades he has planted hundreds of thousands of trees on Netherwitton Estate and felled some mature woods. He has run the estate sawmill, erected and maintained miles of estate fencing.  His ability to assess dangerous trees and fell them safely, say the estate,  is second to none.

Philip recalls: “Age 17 I started working in the family quarry.  Twelve-hour days Monday to Friday and six hours on Saturday – a 66-hour week.  At 19 I heard there was a vacancy at Netherwitton Estate and jumped at the chance to get out of the quarry.  After an interview with Raleigh Trevelyan, I started working as a woodman for the Estate.  A forty-hour week with a house included.  I felt so lucky to be out of the quarry, working outside, felling trees.”

“I most enjoyed working outside and the variety of work.  When I first started it was very much about being the quickest.  We worked on a bonus scheme, based on the cubage of trees felled.  Personally, I had to fell the most.  Later I enjoyed the challenge of running the sawmill and working alongside some great characters.

“The satisfaction I felt when felling a challenging tree, ensuring it fell exactly where I wanted it to, never dimmed.”

For Netherwitton Estate, owner John Trevelyan said: “Philip has been indispensable to me during my tenure as his knowledge of the estate woodlands and people is second to none.  Over the years he has seen huge change in forestry practices and adapted accordingly – I wish he would write a book about his life on the estate, to record his experiences and wisdom.”