Trees are sprouting up in Marlowes 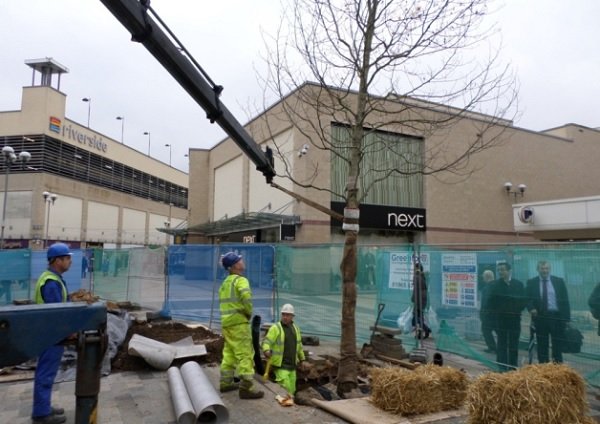 A number of mature trees have sprouted up alongside the area’s existing greenery to create a central line down the pedestrianised area.  The seven 10m-high tulip trees are a key feature of the improvement works currently being carried out by Dacorum Borough Council.

They will be followed by more in the New Year, and were chosen after careful consultation with tree experts – both from the landscape architects and the council.

According to the authority, this type of tree only needs low maintenance as it keeps leaves for longer and will drop them in the autumn over a short period of time. A spokesman for the council said: “It’s not only beautiful, with an unusual flower, distinctive leaf shape and attractive autumn colour, but is also tough and fast growing.”

“This will become a pleasant green space for people to relax and enjoy, encouraging shoppers and visitors to stay for longer.

“Our primary aim throughout all the improvement works has been to keep Marlowes open for business.

“Transporting and installing such large tree specimens is a complicated job, but our contractor Greenford has been working hard to let everyone know what’s happening and to minimise disruption.”

The authority has confirmed the work is now pausing as planned, to allow Christmas shopping and festivities to go ahead without disruption.

Most of the paving in the first phase of the works has now been completed, while drainage systems have also been dug and electrical ducting laid.