Trees to be removed from near railway line 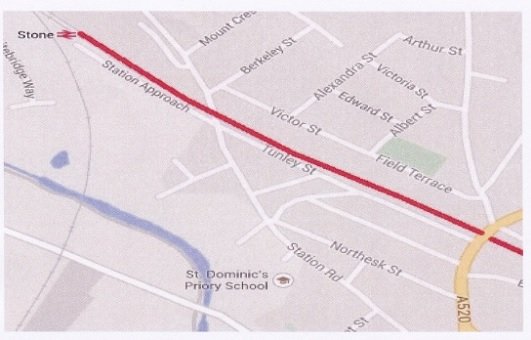 Network Rail will be carrying out the works from 12th January to 3rd April, mainly between 8.30am and 4.30pm, but with some overnight works in February and March (dates below).

A letter sent to residents living next to the parts of the railway line where works will be carried out says: “We will be removing any potentially dangerous line-side trees and plants, prioritising areas that pose a significant safety or performance risk. All sites will see a clear six-metre wide corridor created on either side of the track and possibly further in areas where trains commonly accelerate and brake.”

Network Rail says that 1,000 trains collided with a fallen tree or large branch across the country last year.

Lime, ash and rowan trees will be removed at various points on the railway line in Stone – you can see exactly where in the maps above.

Network Rail says in the letter: “We are very aware of the impact that removing trees and vegetation can have on local communities. We particularly know that this can come as something of a shock for people who have become accustomed to lines of trees near their homes or workplaces. But for the safety of our passengers and employees we have no option but to take action to reduce the risk posed to the safe, reliable running of the railway.”

The work schedule, including overnight works…