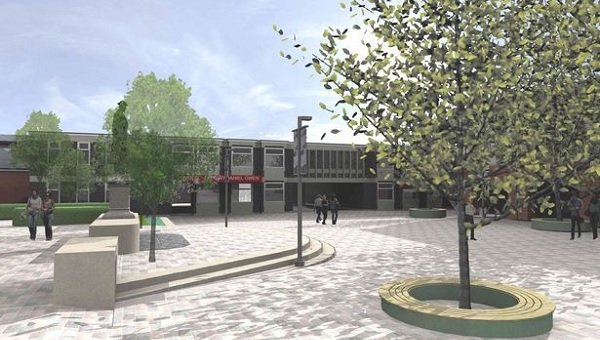 Trees grown in Italy are the latest overseas import to cause a problem to the revamp of Mold’s Daniel Owen Square.

A selection of Italian trees which were meant to be included in the controversial £660,000 town square upgrade have been returned because they “were not of sufficient quality”.

But the setback will not cause further delays to the project, a Mold Town Council meeting was told.

Work began on refurbishing Mold’s Daniel Owen Square in July but its completion will over-run by two months after a delivery of granite from China proved problematic.

for the town’s Christmas lights switch-on being re-jigged.

Now the Italian-grown trees have been sent back to a mid-Wales nursery from where they came.

The revised January completion date will not be affected by the return of the trees, as Welsh Water is to dig up Mold High Street as part of its ongoing water infrastructure works in the town from January 12.

Dave Hill, Mold town centre manager, told councillors at a meeting at the town hall on Wednesday: “When the trees arrived the project team felt they were not of sufficient quality.

“Some were damaged and the nursery we purchased them from thought the same when they visited to survey them.

“The trees have therefore been sent back because they are not suitable and we are awaiting replacements.”

Replacements are expected to arrive next week.

Meanwhile the laying of the granite is already well under way after it was chosen to cut costs on the scheme.

A Flintshire Council spokesman said: “Trees in urban environments are selected with care to ensure they have the desired visual impact and they have the best chance of survival.

“There are a very wide range of types available for designers to select from and they need to be  matched against the specific conditions on the site to make sure that their ultimate size and shape is appropriate.

“Large specimen trees are selected with particular care and each tree is examined on site to ensure it meets the quality standards required.

“The works to Daniel Owen Square were competitively tendered with GH James winning the contract and as the lead contractor has the freedom to select sub-contractors and suppliers as needed to fulfil the contract.”

Concerned councillors have also demanded imminent works to replace “crumbling” water mains in the High Street do not take place until Daniel Owen Square is complete to prevent increased disruption.

Cllr Geoff Collett told the meeting: “If work to the square is not completed then work in the high street shouldn’t go ahead.

“If it does then Mold risks becoming a ‘no go’ area and we will lose people.”

But Sharon Blackwell, spokesman for Welsh Water which is carrying out 3.6km of upgrades over a

40-week period throughout the town due to increased iron levels, confirmed work on High Street will begin on January 12.

She told the meeting: “Work on New Street is progressing well and we hope it will be completed before Christmas.

“Works on both the High Street, from the cross to the junction of Earl Road, will begin on January 12 and will take from four to six weeks, as will work on Chester Street.”

Welsh Water revealed it has only received two anonymous complaints about the works so far.