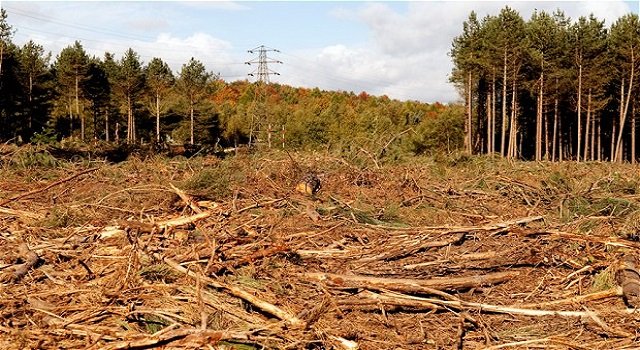 The number of trees being planted across the UK is falling far short of targets for creating new woodland, conservationists have warned.

Figures from the Forestry Commission showed that just 3,300 hectares (8,150 acres) of new woodlands were planted in England in the 2013/14 planting season.

The amount of woodland planted was an increase of 700 hectares (1,730 acres) on the previous year, but is far below the ambition set out by the Government of planting 5,000 hectares (12,350 acres) a year.

The commitment was set out in the Government’s forestry policy for England, developed in the wake of the aborted plans to sell off or hand to charities all of the country’s public forests, which provoked widespread outcry.

The Government has stated that in England the current rate of planting could be increased to achieve 12 per cent woodland cover by 2060, with an average planting rate of 5,000 hectares a year – provided private investment increases in line with expectations.

But the Woodland Trust warned the slight upturn in planting in England last season was down to a rush of landowners applying for woodland creation grants before the old scheme closed early in December 2013, but there would be no new grants until 2015.

In future the Government will be funding the planting of just 2,000 hectares a year in England through the grant scheme, although it has pledged to put in place the conditions for a “step change” in woodland creation from private finance, the Trust said.

Woodland Trust director of conservation Austin Brady said: “Government committed to put in place the conditions for a step change in woodland creation but these figures suggest that has just not happened.

“Defra has stated that central grants will fund a maximum of just 2,000 hectares in 2015/16, leaving the private sector to fund an additional 3,000 hectares, for which there is no historical precedent.”

He added: “Our woods and trees face a battery of assault from climate change, pests and disease, and development. At a time when there is an urgent need to build environmental resilience, the right incentives are clearly not in place yet.”

He also warned that woodland losses were barely referred to in the Forestry Commission statistics and were not being recorded adequately, which made it hard to assess the overall woodland cover.
England has 10 per cent woodland cover, with the total for the UK as a whole standing at 13 per cent, making it one of the least wooded countries in Europe.

Overall 37 per cent of the EU is wooded. Germany has 32 per cent woodland cover, Spain 36 per cent and France 29 per cent.

An Environment Department spokeswoman said: “Woodland cover in England is at its highest level since the 14th century – last year we planted around 5.4 million trees and this year will see us plant four million more, creating more than 6,800 football pitches-worth of new forest.

“We are investing £6 million next year so we can continue to plant more trees.”