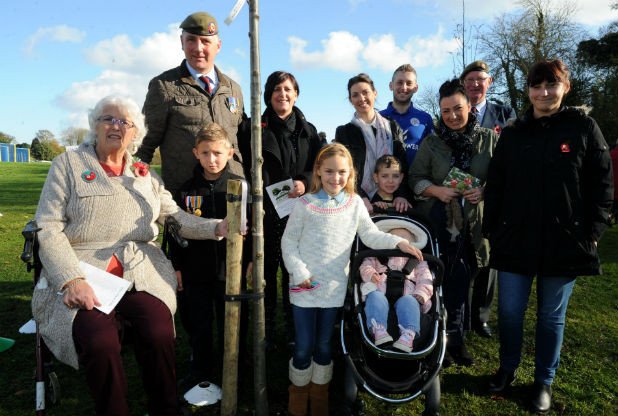 A row of 50 trees has been planted in memory of a band of young volunteers who were among the first to sign up to fight in the First World War.

The rowan trees were planted in Hugglescote, on Saturday, in honour of The Famous Fifty.

The soldiers, all drawn from the Coalville area, travelled to France with the Royal Leicestershire Regiment to support the depleted British Expeditionary Force.

Up to 500 people attended the 50 Trees for 50 Soldiers even, in Millfield Recreation Ground, where a plaque was also unveiled to the Fifty.

Among them was Denis Baker, 84, from Swannington, whose late father, Walter Sannington Baker, of Coalville, was one of the Fifty to survive the war.

He said: “They all knew each other and, without much training, did very well for the British Army.

“It was an excellent and very tasteful tribute.”

Fifty pigeons, the bird which troops relied on to carry messages during the conflict, were released into the air by local fanciers during the service.

It was organised by Hugglescote and Donington le Heath Parish Council thanks to a £9,000 donation from the Sence Valley Environmental Fund, in nearby Ibstock.

Llynda Baugh, the council’s community engagement officer, said: “It was a very moving event and we hope a fitting tribute to these brave men.”