Trees are planted at Centenary Wood 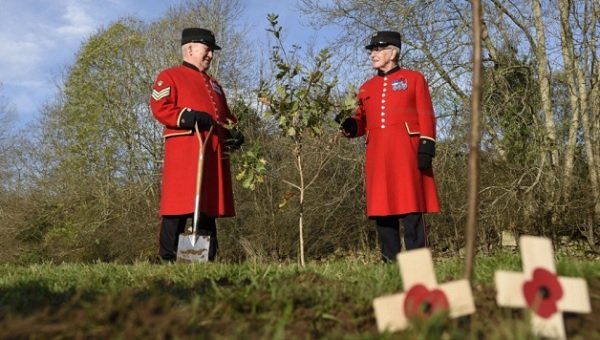 Scores of people from all walks of life turned out on Saturday to take part in a tree planting ceremony at the newly created Centenary Wood just off Glenshane Road near Claudy.

Despite the cool autumn day those who took part planted the first of 40,000 native trees as part of the ongoing living tribute to the dead of World War 1, spearheaded by the Woodland Trust. Brackfield Wood, where the Centenary Wood was officially launched in April by The Princess Royal, Princess Anne, is one of just four flagship woods being created throughout the UK to commemorate the 100th anniversary of the First World War.

On Saturday local man Stanley McMinn planted the first tree in memory of his uncle, Private Edmund Gray who died at the Battle of Passchendaele in 1917. During the visit by Princess Anne Mr McMinn spoke animatedly with the Princess about his uncle and this large display of memorabilia.

As part of the first planting event, Chelsea pensioners Paddy Fox and Walter Swann from the Royal Hospital Chelsea, and Woodland staff, dressed in period costume, added a rich splash of colour to the event.

A second planting ceremony will take place today, Wednesday, when the Mayor will be assisted by members of Mencap, as more trees and bulbs, including poppies, are planted to commemorate the lives of those from Northern Ireland who lost their lives in The Great War.