Trees Planted On Bridgnorth’s Riverside As Part Of Regeneration 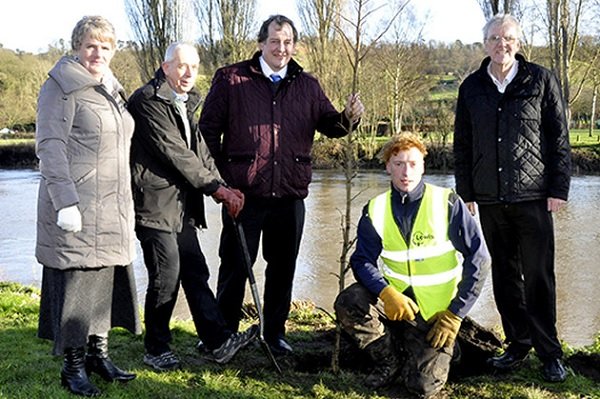 Intensive clearance work was carried out on Bridgnorth’s riverside last autumn, opening up the views and allowing access to residents and visitors alike.

The replacement trees, donated and planted by Lewis Aborcare, are being planted this week.

Feedback following the clearance work has been very positive. People who fish in the area have commented that some of the fishing pegs – now clear – have not been accessible for many years. And visitors to the town say they are pleased that views of the bridge and cliff railway have been restored, indicating the project has been a huge success.

The riverside enhancement project was developed by several organisations in the town after local people expressed concerns – through the Bridgnorth Town Plan – about the condition of the riverside, and about how it should play a much greater role in boosting the town’s economy. It is being led by Shropshire Council, in partnership with Bridgnorth Town Council and the Low Town Action Group.

The work is being carried out by staff of Lewis Arborcare, Ringway, and Bridgnorth Town Council.

The project has been funded through Shropshire Council’s Market Towns Revitalisation Programme, and cost approximately £100,000.

Steve Charmley, Shropshire Council’s Cabinet member with responsibility for market towns, said: “I’m delighted that this important clearance work has now been completed and that funding from the council’s Market Towns Revitalisation Programme has helped to make it possible.

“I’ve seen at first-hand the incredible difference this work has made to the riverside, and to the views over Low Town.

“I’m confident that enhancing and improving Bridgnorth’s riverside will provide a real boost to the town as a whole.”

Anne Wilson, town clerk with Bridgnorth Town Council, said: “As part of this project the Direct Labour Force all received training to work along the riverside, which will stand them in good stead for the future maintenance of the area. They also had the opportunity to learn new skills from Ed Lewis when they assisted him with the removal of the waste from the site as the project progressed. We look forward to continuing the good work that has been carried out.”

Ed Lewis from Lewis Arborcare said: “The project has been a challenging one but very worthwhile to be involved in.” Christian Lea, a Shropshire Councillor for Bridgnorth East and Astley Abbotts, said: “A superb job has been done clearing the riverside, and it is looking better now than it has done for many years. I would like to commend everyone involved with this project.”source