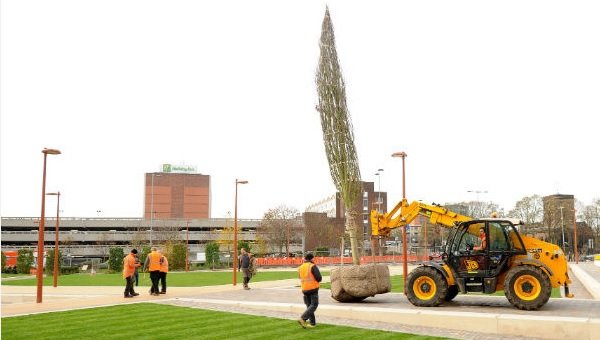 Workmen have been putting some of the final touches to Leicester’s new Jubilee Square by planting trees.

Around ten mature trees at being added to the £4 million plaza in St Nicholas’ Place.

The aim is to add features to the space as well as help screen it from the traffic of the nearby ring road.

The trees, some of which have been imported from Germany, include five freeman maples, three Indian bean trees, each around 6m high, and two snowy mespilus.

The species have been chosen for their attractive blossom and autumn colour.

The square partially opened and the end of August – several months after its intended completion date in May.

It has been a controversial development with businesses complaining about the loss of the 50 space car park it replaced and the harm prolonged works have caused to trade.

Some critics have said the £4 million cost cannot be justified at a time when the city council is cutting services and closing public buildings.

However city mayor Sir Peter Soulsby said he was pleased withe the project as it neared completion.

He said: “You can really see it coming together now. It is a great new public space for the city.”

Shopper Kathleen Cooper, from Ratby, said: “I think it looks terrific although it is a lot of money to spend.”