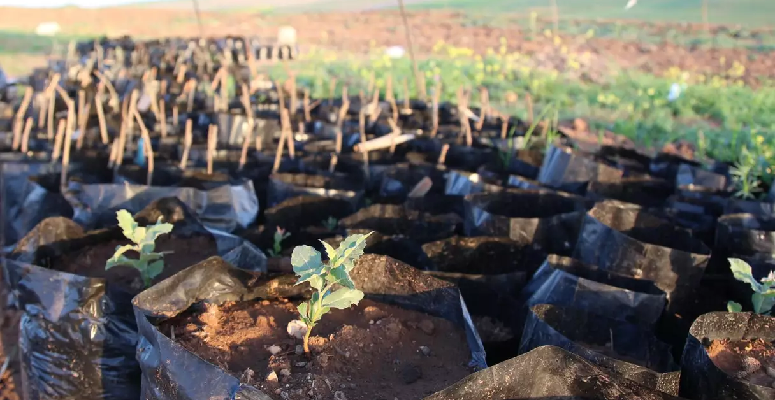 “Thirty years ago this area was full of trees,” Adin says, pointing at a dusty swathe of harvested wheat fields spreading to the horizon and the Turkish border beyond. “Then the regime sent men to cut them all down.”We are in the autonomous region of northern Syria known as Rojava, standing atop a hill planted with young saplings.

To untrained eyes the landscape seems impossibly arid. But Adin, a Kurdish friend who works at a fledgling tree nursery in nearby Derik, remembers when it was still green and living.

Widespread deforestation is only one tool used by successive generations of the Assad Syria dynasty to repress the Kurdish people who make up the majority of Rojava’s population.

Likewise, the central government enforced overproduction of wheat, using Rojava’s fields to keep Damascene grain stores overflowing. This unnatural state of affairs was enforced through a ban on growing trees and crops other than wheat. Overuse of destructive fertilisers kept the land surviving on life support, forever on the brink of famine.

Speaking with local people and ecological committees, we learned how Turkey restricts the flow of rivers to keep Rojava at permanent risk of drought, how Isis destroyed water sources and set destructive oil fires to mask their movements as they fled before the Kurdish resistance, how years of war have left the region ravaged with heavy metals from munitions and other toxic waste.

That’s why we’re establishing a tree nursery, helping to restore fertility and stability to the land. The planting of trees symbolises our will to contribute to the construction of an ecological society, going beyond the life of the individual to contribute to future generations.