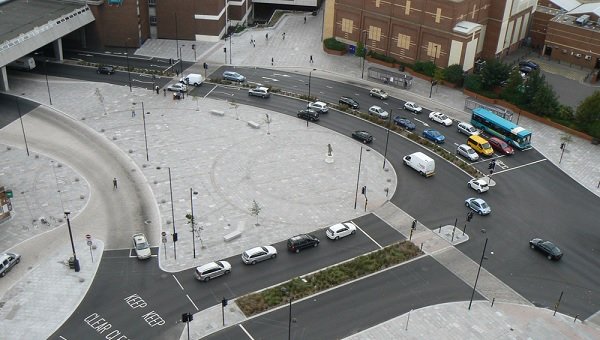 Workmen have begun replanting trees at Victoria Gateway in a bid to attract more people to the public space.

Trees, green areas and new seating will be added to the large open space outside Southend Victoria Station to encourage more people to gather and make access to the High Street clearer.

Mature trees were removed from the old Victoria Circus roundabout in a multi-million revamp of the key junction in 2011.

Martin Terry, Southend councillor responsible for transport, said: “I am very pleased that this work is going to take place, which will make a big improvement to what is an important entrance into the town.

“We know that there has been much debate about this area since it was created, so the council have reviewed what is there and listened to local people.

“The plans that have been created follow numerous comments, feedback and widespread public involvement.

“This work will create a much friendlier and safer public space, bringing some new greenery and a community garden into the heart of Southend, along with tactile paving.

“This exciting development is about creating more accessible, better streets and places for people to enjoy in Southend and I look forward to seeing the work completed.”

Contractors have begun digging trenches ready for the new greenery.

New lighting will also be installed and access to and from the High Street will be clearer and more defined.

Community events will be held on the plaza.

A ninth-month review of Victoria Gateway by John Dales, from consultancy Urban Movement, concluded trees, seating and lighting could be added to the open space to give it “sense of place”.

It also called for a “bolder public art installation” than statue “the Return”, which has failed to attract people to the area.

Mr Dales suggested the skateboarders could be encouraged, rather than seen as a menace, or other activities, such as table tennis, be added to the area.

Hundreds of residents put forward ideas for the improvements in community events and workshops as part of the council’s “pocket places” project, culminating in a series of projections onto a giant pyramid in the plaza in April.

Work on the project is due to be completed by the end of September.