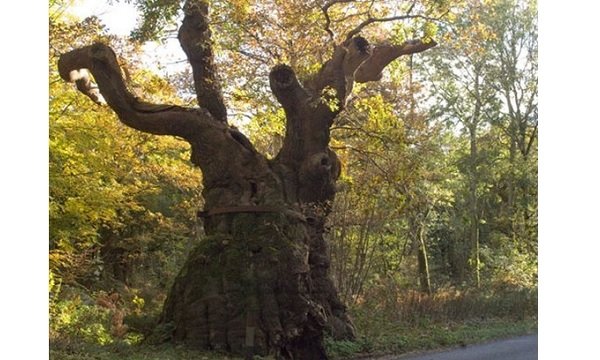 There are 280 million trees in Britain – that is at least four for every man, woman and child.

But remarkably, the places with the most trees are not the rural idyll of Dorset or Somerset, or the leafy lanes of Wiltshire – but dirty, smelly London town.

The nation’s first comprehensive mapping of every single tree and sapling in England and Wales has been carried out using the latest aerial mapping technology – and it has discovered the most densely-populated areas of the country for trees are in Surrey and London.

Even the West Country district named after an actual forest contains nowhere near the percentage of the ground covered by a tree canopy as the suburban delights of Guildford and Woking.

The first tree map, which measured how much of the ground is obscured by trees using pinpoint aerial mapping techniques, discovered barely more than a quarter of the Forest of Dean is actually a forest, which puts it way behind some areas of Surrey and London that have far more than a third of their space under a canopy of trees.

, while Surrey’s countryside is likely to be turned over to agriculture than the dairy fields of Somerset or the rolling hills of Wiltshire’s chalk downs.

The new tree map shows large light patches where you’d expect to see trees in the countryside – and large dark green over London and surrounding areas.

People behind the research says Surrey features so heavily because of the large gardens – where in more rural areas trees tend to be cut down for agricultural reasons.

Rather than rural areas, its the residential estates and urban streets that are more heavily covered by trees, researchers found using photographs taken from planes.

The Surrey Heath district of Surrey is top with 40 per cent covered, making it the most densely populated area.

A long list of places in Surrey and the fringes of London have more than 30 per cent canopy coverage. The Forest of Dean in Gloucestershire contains the densest population of trees, with 27.7 per cent, followed by Teignbridge in Devon with 25.6 per cent and Poole with 23.6 per cent.

Unsurprisingly, the small and very urban peninsula of Weymouth and Portland contains just 8.8 per cent trees and is bottom of the list for the West Country, but South Gloucestershire, near Bristol and Sedgemoor in Somerset are pretty sparse too, with just 10.9 per cent of the land covered by leaves and branches.

The technical director of mapping company Bluesky, James Eddy, said: “If you think about driving around Surrey, it’s the big gardens and big houses with all the trees.

“It’s strange – you’d think the big forests would be in the top ten. But the forests tend to be in more rural areas which are heavily farmed. They have taken out huge rows of trees and grown crops – that doesn’t go on in Surrey.

“We were also quite surprised at London and how green it is – most people think cities are devoid of trees,” he added.

While the West Country does not come anywhere near the top 10 districts across England and Wales that have the most trees, our region is not anywhere near the bottom either – the flat, treeless expanses of East Anglia and the Fens of Lincolnshire and Cambridgeshire are unsurprisingly at the bottom of the tree density league table.

Bluesky’s managing director Rachel Tidmarsh added: “It’s really interesting to be able to blow some preconceived ideas out of the window and dispel many popular misconceptions that surround the way we view the places where we work, live and play.”

Bottom 3 in the West